Why Did the Duck Cross the Pond? 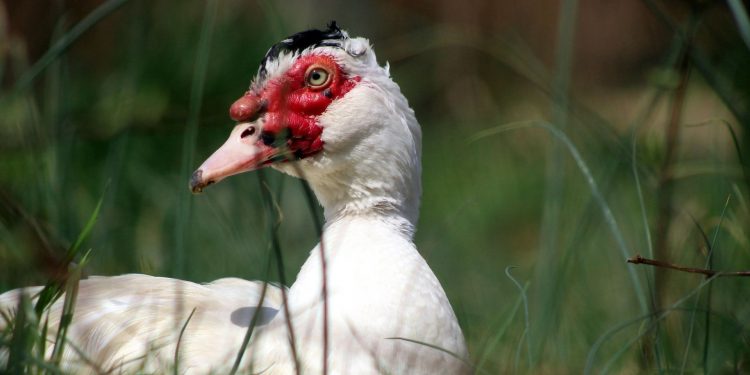 About a month ago, a call came into the Piedmont Farm Animal Refuge about a bloodied duck at Pittsboro’s Town Lake Park. The call, made by Chatham resident Kristy Bardwell, led rescuers from the Piedmont Animal Rescue to an injured duck.

Lenore Braford, Animal Care Director of the Piedmont Farm Animal Refuge located in Pittsboro said the duck, now named Kristy, had minor injuries when they trapped it. But fortunately, it has recovered and has been integrated into the Refuge’s flock.

Soon after the rescue of Kristy the duck, the Refuge received another call from Kristy Bardwell—this time alerting the Refuge of a dead duck which appeared to have been killed by predators. The Refuge began working to find a suitable home for the remaining ducks in the Park, as the Refuge’s flock was now at capacity.

“We reached out to Sky Watch Bird Rescue on the coast,” Braford said. “They said if we could catch them, they would take them.”

The death of the duck “really motivated” the team at the Refuge and though Braford admits the team “wasn’t really experienced in water rescue,” they gathered up volunteers, two canoes, and a kayak to make it happen. Fortunately, the team was able to trap and crate the animals on dry land, which was a sigh of relief for Braford.

The birds have been transported to the Sky Watch and are under quarantine until they are eventually integrated into a flock of ducks there.

How did the ducks get there?

Kristy the duck was part of a flock of domesticated Muscovy ducks that Braford said appeared to have been “dumped” at Town Lake Park. She said there was some “word of mouth” about the ducks with local residents coming to feed the ducks on a regular basis. Muscovy ducks are a non-native species which are “bred for meat production,” however, they are also considered an “invasive species.”

“As domesticated ducks, they couldn’t survive in the wild,” Braford said. “[And if they did survive,] they would probably reproduce really quickly.”

Braford noted that during the pandemic, the Refuge has been inundated with calls about ducks and chickens that need to be surrendered. Braford believes this is a result of the COVID-19 pandemic. Braford notes that the rate of purchase of chicks and ducklings increased last year as people sought ways to ride out the pandemic. Once those animals got to full size, some of the purchasers grew to regret their decisions, which in turn led to an increase in the dumping of domesticated birds.

“Releasing these birds into the wild is a death sentence,” Braford said. “They simply cannot compete with the wild birds.”

Braford hopes that people interested in domesticated chicks and ducks educate themselves so that they can make wise decisions about them. Domesticated birds require the owners to protect them—beyond simply feeding—and include ample outdoor space for the animals to keep them from predators.

“If you’re thinking about getting chicks or ducks, remember it’s a lifelong commitment,” Braford said. “Just like it would be for your dog or cat.”

And if you are willing to make that commitment, Braford asks that you consider the “Adopt Don’t Shop” policy.

The Piedmont Farm Animal Refuge has reopened for tours, following COVID-19 safety guidelines. This is an opportunity not only to learn about the Refuge and what it does, but also visit Kristy the duck, who is doing swimmingly in her new flock.