What to do About Jumping? 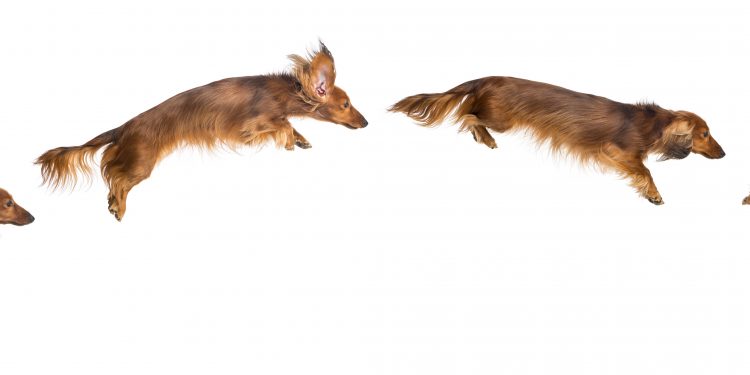 Jumping up on people is a very common issue with dogs. They jump mainly to demand attention and this often begins while they are puppies. They continue to do it because they find it works. Puppyhood is the best time to set the expectations for what will be acceptable and to discourage any habits or behaviors that would not be desired when they are adults.

Dogs are jumping up to peoples’ eyes. Looking at an excited dog for more than a couple of seconds can be misinterpreted as an invitation to jump up. Simply not looking at them can be all it takes to prevent some dogs from jumping.

If not looking at the dog doesn’t work, then when the dog jumps up, the person should fold their arms, look up and freeze. Since dogs are usually jumping to get attention this will make them think jumping hits the “off switch” on people. It’s not simply ignoring the dog, it is completely shutting down. When all four paws are back on the ground the person comes back to life; but still don’t look at the dog. Acknowledge the dog only when he sits. Don’t tell the dog to sit. Let him figure it out. The result will be a dog who sits when seeking attention, rather than jumping.

NOTE: If they believe jumping has worked in the past, when first using this technique, some dogs will jump higher and harder for a short period of time.

In my experience, the above techniques work for about 80% of dogs. For dogs who are still jumping then try the following techniques until you find the one that works. In conjunction it can be helpful to use a deep, harsh voice when making corrections. Keep it to one or two syllables. Say something like, “Stop!” or “Off!” or make some sort of sound that is only used for corrections. The first four steps below are done with the dog wearing a collar and leash. Set up scenarios for training when the dog is under the control of a responsible person.

Valerie Broadway, the Canine Coach, is a dog trainer and behavioral specialist. Contact: 919-542-4726 or CanineCoachingServices.com.

Don’t Let Stress Cause a Mess