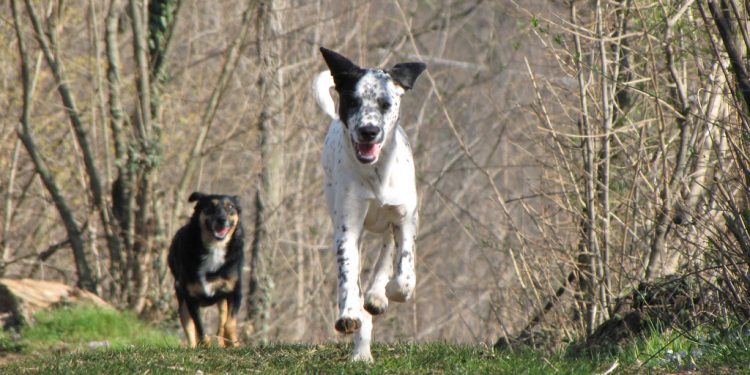 Opinions may vary, but most people would describe a great dog as one who is friendly, wants to spend time with humans, has good manners, responds to commands, can go places without causing problems, and doesn’t destroy things. I’ve worked with many dogs with a variety of personalities and behavior issues. What I’ve found is in almost every case the recipe for making a dog great is the same. These are things in addition to quality food, vet care, and providing a safe environment that all help make dogs great.

The first ingredient of this recipe is exercise. Dogs must expend a certain amount of energy every day. The amount depends on the age and breed of the dog. Giant breeds don’t need as much exercise, while herding breeds need a lot more than most people may assume. Dogs need to run as fast as they can, preferably off-leash, as least once a day. Puppies, young adults in the prime of their life, and high energy breeds will need to do this multiple times a day.

The next ingredient to add is the relationship between dogs and their humans. The humans must be in the leadership role between the two in order to have a healthy relationship. Typically, most dogs immediately assess the hierarchy between themselves and the people they are around. Dogs who think they are in a higher position may opt to not listen to the humans and may even become aggressive toward them. When the humans are clearly in charge, dogs are much less likely to be anxious.

NOTE: The more time dogs spend with their humans, the better the relationship. Dogs who live inside the house will almost always have a better connection with their people than dogs who don’t.

Socialization is an ingredient often inadvertently missed by people with their dogs. Most problem dogs are under-socialized. This means they have not been exposed to very many different types of people, places, and situations. As a result, experiencing new things becomes stressful for the dogs. Socialization should start while pups are still with the litter. The entire first year of a pup’s life should include  constant exposure to the world. During this time, puppies are still open and accepting of new things. If this first year window of opportunity is missed, they often become adult dogs who are easily overwhelmed by new things.

Dogs with a daily routine/schedule are likely to be less anxious than those without one. Dogs are comforted by knowing when they will eat their next meal, get to go outside to relieve themselves, and get to exercise and socialize with others.

Dogs’ lives are much richer when they get opportunities to have fun. The ingredient of play can go hand-in-hand with the first ingredient mentioned, exercise. Dogs have different preferences for play, usually based on the breed. Some prefer games that involve running while others might be more interested in wrestling. When two dogs with different preferences play together they may come to a compromise and play a game of tug-of-war with a toy. If there is a large size difference between two dogs then the bigger dog will usually tamp down how hard they play in order to keep the smaller dog engaged in the fun. If there is not another dog to play with then the humans can play with their dog as though they are the other dog, to the best of their ability. Even though humans cannot play as effectively as another dog, from the dog’s point of view playing chase and tug with a human is better than nothing.

Dogs are very smart and like to use their brains. At minimum they should get the ingredient of communication. This can be accomplished by teaching basic commands: heel, sit, stay, down, and come. This helps dogs realize there is a shared communication with people. This also establishes that the human is in charge and tells the dog what to do, not the other way around. This is incredibly important for dogs with a lot of energy and intensity. There are hundreds of tricks and commands dogs can learn, as well as many types of classes and activities to stimulate dogs’ brains and help keep them physically fit.

When people add a dog to their household they often have expectations of the dog. Little thought is given as to what the dog may want or need from us in return. Dogs want all of these ingredients to be fulfilled. Making sure they get them will result in dogs with fewer issues—and they are much more enjoyable to live with. Creating a great dog really is as simple as including the ingredients of exercise, relationship, socialization, routine, play, dog friends, and communication.

Valerie Broadway, the Canine Coach, is a dog trainer and behavioral specialist. For more information, call her at 919.542.4726 or visit www.caninecoachingservices.com