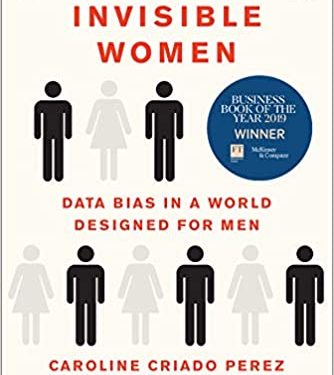 A dear friend gave me a book for my birthday that I finally got around to reading. Invisible Women, Data Bias in a World Designed for Men is not what you would call light summer reading, although it is an easy read. It discusses how our HIStory has a huge data gap. “The chroniclers of the past have left little space for women’s role in the evolution of humanity…the lives of men have been taken to represent those of humans overall.”

Now some of the consequences, such as drugs that are designed for men but affect women very differently — to heart attack symptoms in women being ignored because they do not conform to the male norm—have dire consequences. But the book presents that the data gap is much more pervasive. Anthropologists don’t see women in the artifacts they uncover – even if they are actually there. Work defined as ‘womens’ work is unvalued and unpaid. Now, the author makes a point that the gender gap is not generally malicious or intentional – but it still impacts women’s lives.

In terms of modern society, the import is significant. Boards, programmers, researchers, policy makers, elected officials, to name a few decision-makers, are predominantly male and generally share a certain level of privilege. Even when women are present their voices are generally ignored. Many of my friends and I have shared the experience of being in a predominantly male group at work or in a committee setting where a point we made went unheard until a few minutes later one of the men said the same thing – verbatim.

But what seems to me most critical is that the policies and decisions are based on limited experience and ignore the needs of at least 50% of society. A case in point would be the focus of transportation planning on roads (used more by men and more affluent folks) vs. public transportation that meets the needs of many women (and working-class folks).

Policy makers need to gather more input and be open to doing things differently. Such actions can have positive economic results. For example, in 2011, Karlskoga Sweden reevaluated its policies through a gender lens. In response to a question ‘was snow clearing sexist’ they looked at snow clearing. Up until then major traffic arteries were cleared first and pedestrian walkways and bicycle paths at the end. Men and women were affected differently as they traveled differently. In general, the men drove and the women took public transportation, walked, or rode bicycles. Snow clearing was not gender neutral. So, the town council switched the order, prioritizing pedestrians and public transportation. They didn’t realize it would also save money. Hospital admissions for injuries due to ice-snow conditions went down significantly. Women were around 69% of those injured. Such injuries cost money in healthcare and lost productivity. Conservative estimates put the cost of pedestrian accidents in icy conditions at about twice the cost of winter road maintenance.

It also seems to me that the gender data gap is part of a broader gap. The needs and patterns of average workers, lower middle class, working class, and the poor are not part of the decision matrix.

As Simone de Beauvoir said, “Representation of the world, like the world itself, is the work of men; they describe it from their own point of view, which they confuse with the absolute truth.” To my mind, bridging these gaps will take intention and a willingness to change the status quo on the part of leaders, as well as a redirection of resources. It may very well require more resources and thus courage on the part of leaders to defy pressure from those who are used to getting the lion’s share of the pie, when they are asked to take a little less.

The Return Of Masking