Trump officially declared loser; in time, his base will accept it 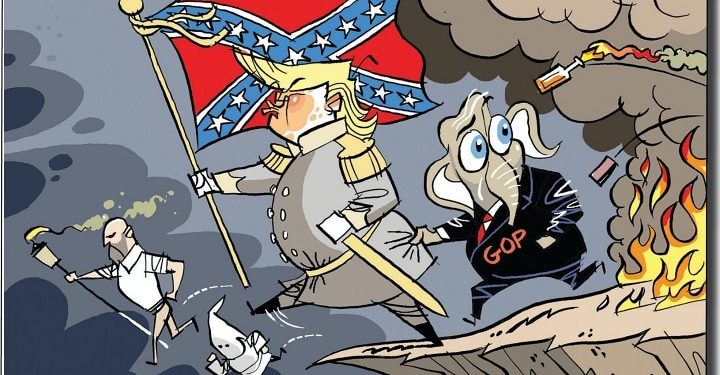 On Monday, December 14, Presidential Electors officially confirmed Joe Biden as the next President while the first shot of the Pfizer Covid-19 vaccine went to a nurse on the frontlines, in Queens, NY. A day to inspire hope. To know that bad times can end, life can get better. Eventually the pandemic will peter out.

But at what cost?As this year of pandemic pandemonium draws to a close, Covid-19 deaths top 300,000 while infections and hospitalizations soar. One American is dying every minute. With unemployment exploding and no aid coming from a divided congress, millions face hunger and homelessness, human misery on a scale not seen here in most of our lifetimes. Deadly times lie ahead.

Next month Loser Trump will vacate the White House, lose his executive power and lose his immunity from prosecution. Over time, he will lose his base.

His most faithful fans, formerly known as the Tea Party, include about 35 percent of all voters and about 75 percent of Republican voters. They have believed every word he has spoken or tweeted. They believe his cries and lies that the election was rigged against him with no evidence of fraud. His suits have been thrown out of court about 50 times, often by judges he appointed.

They buy his every lie about Covid-19. That it’s no worse than the flu; that it’s a hoax; that it’s a Democratic plot to tank his economy, the centerpiece of his election campaign; that bleach might be a cure; that children are immune. He disparaged masks and didn’t practicing distancing.

Unsurprisingly, scores have been infected, including him, most of his family and many of his staff. Many follow his example and eschew masks, gather indoors and don’t distance. Those who are healthy and younger will mostly recover. Those who are older and frailer won’t. And no telling where it will spread. Some who died of Covid-19 continued claiming it was a hoax with their dying breath.

That was all before the Electoral College officially declared him a loser. Mitch McConnell and Senate Republicans did likewise, although not in those words. Control of the Senate will be decided in Georgia, and it’s a hard sell to claim the Georgia vote was rigged in November but Republicans should risk Covid-19 to vote again in January. You can’t have both ways.

Trump loyalists, whether they trust the results or not, believe that Biden is going to be the next president; no different that Hillary Clinton supporters four years ago.

Fascist leaders need an aura of invincibility, and that’s gone forever. Trump is indeed a fascist. He fosters hatred and division. He touts his own infallibility. Anyone who doesn’t support him is an enemy, and support means total subservience. He used the power of the presidency to advance his own political and financial interests. He denounced our democratic allies and cozied up to every autocrat he could find. When he lost the election, he attempted a coup to nullify the will of the voters. He bullied officials in Georgia, Michigan, Pennsylvania and Wisconsin to do his will and when instead they did their duty, armed goon squads surrounded their homes and threatened their families. Scariest of all are elected Republicans,120 members of Congress and 17 State Attorneys General, who were willing to destroy democracy because their candidate lost. At least these snakes have come out of their holes and let themselves be known.

The good news is they failed. Election officials, judges, governors and attorneys general in the contested states, Republican and Democrat alike, did their jobs honestly. We disposed of a would-be dictator at the ballot box. That is something to really rejoice about.

“Autogolpe” Is this what POTUS has in ...