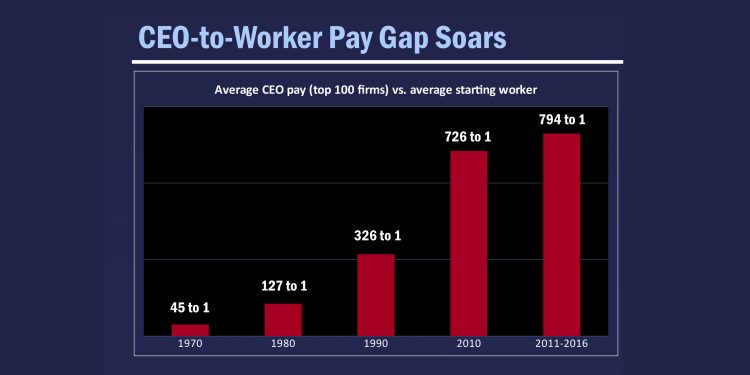 Congressional Democrats recently introduced legislation to expand the Federal Reserve’s dual mandate and to have the Fed also consider and report on issues of racial equity and inequality. This would be in addition to its current mandate of price stability and maximum employment.

On combating income inequality more generally, Fed Chair Jerome Powell noted earlier this year that achieving the Fed’s mandate of a strong labor market was a key solution. However, a strong labor market appears to have been only a partial solution to rising inequality. Yes, tight labor markets at the end of business cycles have brought about rising wages for lower paid workers. But since the late 1970s, these have been the equivalent to one step forward following two steps back. Inequality rose over this period despite points of very low unemployment.

Congressional Democrats are right to want to have the Fed report on distributional issues and consider it to some extent. And the Fed certainly has a role to play in combating inequality. But, there are real limits to monetary policy and the Fed’s regulatory activity with regard to complex distributional issues. Therefore, it is necessary for Congress to bring fiscal policy and more general economic policy to bear as well.

A dryly-titled CBO report from July 2019, “The Distribution of Household Income, 2016,” sheds light on key aspects of the rise in income inequality over the past decades. The report found that between 1979 and 2016, for the lowest 20 percent and middle 60 percent of households in terms of household income, real incomes rose 33 percent for each. But for the top 1 percent it grew by a whopping 218 percent. This reflects the growing disparities in “gross” market income that has been seen in a number of studies and helped give rise to movements such as Occupy Wall Street.

The CBO study also showed that when taxes and government transfers are factored in, the incomes of the top 1 percent still skyrocketed — but the lowest-income households now had their take-home income grow at a rate that was close to the national average (85 percent). It was households in the middle that saw a much slower growth in their take-home income (47 percent).

This shows that while market forces have disproportionately benefited those at the top of the income distribution, government policy and safety nets helped to support those at the bottom, leaving a “missing middle” of policy responses.

Traditional safety nets and mean- tested programs likely have limited applicability for households in the middle. Tax reductions benefited them, but they were just not enough to offset the total rise in gross income inequality. However, further tax reductions could easily have been used to reverse or prevent the inequality rise. These reductions could include lower marginal rates, tax credits, reducing payroll taxes, or even negative rates. Tax increases on the top 1 percent could balance this. These tax increases need not be new types of wealth taxes; closing loopholes and or raising marginal income tax rates would do.

In other words, taxes can simply be made to be more progressive to offset increased income inequality. This is not novel at all, but it works.

By design this is tax-neutral and merely counters increasing inequality whether it comes from misguided policy, unintended consequences, or a changing economy. The popularity of Andrew Yang’s proposed Universal Basic Income points to the public’s desire for such straightforward policy. But, while a national UBI may be seen as experimental, progressive taxation is well tested and very politically feasible.

The CBO released an update to their report in December 2019 projecting income distribution changes to 2021. The story is the same. Income growth for the top 1 percent was projected to outpace gains for the remaining 99 percent.

We should not view rising income inequality as outside of our control. The CBO reports show that straightforward solutions exist that include well-tested tax policy and safety nets. Such solutions can be deployed as either a first step, direct policy intervention or as a backup if trade, investment, education and other policies fail to arrest rising income inequality.

The Federal Reserve, with its potentially expanded mandate, or another agency, could be tasked with producing annual income distribution figures that take account of taxes, transfers and benefits. Using these, taxes could be made to be gradually more progressive to counter increasing market income inequality. This would ensure that we have a broad-based rising tide and not just a skyrocketing 1 percent.

Patrick Walker, a resident of Chatham County,  is a fintech co-founder, the director of research for a nonprofit research organization (PERC) and board member of two national nonprofits.