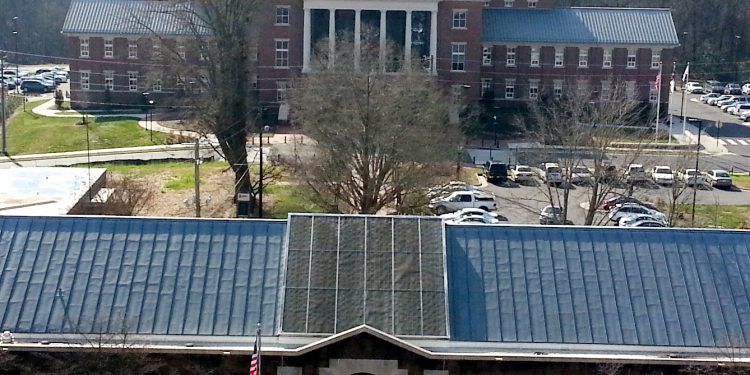 DEEP DIVE: CHATHAM COUNTY BY THE NUMBERS (PART 1 IN A SERIES)

Budgets can be complicated and boring. For many of us, the big questions about the annual county budget revolve around how much will we have to pay in taxes and what are the new utility rates.

In this issue, we’re providing an introduction of sorts, including an overview of the process and the basic nuts and bolts of the county’s budget which is close to $150 million for this fiscal year.

The fiscal year for public budgets begins on July 1 of each year and ends June 30 the following year. Every local governing body in North Carolina, whether a county, town or water district, must have a budget passed by June 30. Depending on the size and services of the governing body, there could be one or multiple accounts. The majority of the work of local governments are done using a General Fund, which is funded mostly by tax dollars. And unlike the way that the Federal Government works, budgets for local and state governments need to pass as a balanced budget.

If the local entity offers utility services, such as water, sewer or garbage pick-up, those services use a separate account, called an Enterprise Fund, which is required by state law to operate like a business would. Financing for this type of fund must come directly from the receipt of fees and charges for the services provided as well as allowable capital access charges and connection fees.

The county staff starts taking input in September and begins working in earnest on the budget around the start of the New Year. The county’s finance department begins to make estimates on anticipated revenues, pending project requirements and what options the county has while maintaining or improving its bond rating, which is currently set by Moody’s as Aa2. Departments create budget requests – often knowing they will only receive a portion of their request – and prepare presentations to the board of commissioners.

In the winter and early spring, the Chatham County Board of Commissioners then hold multiple retreats where they hear budget requests and voice their budget priorities for the upcoming year under the guidance of staff members to stay within budgetary restraints. After the retreats, the staff works to coalesce all the information into one proposed budget.

Late spring, the staff present a final proposed budget to the board. That budget is then put on display at different places in the county, usually libraries and online, for at least two weeks. After that time, a state mandated public hearing is held where residents are given the opportunity to voice their thoughts on the proposed budget. Following that procedure, a budget amendment is passed and the work of the county government continues.

On June 15, the Chatham County Board of Commissioners passed its fiscal year 2020-2021 budget. The budget for the General Fund is $132,335,610. The county also has three Enterprise Funds for solid waste, the southeast water district and a general water fund – totaling $13,008,496.

REVENUES FOR THE CHATHAM COUNTY BUDGET

The bulk of the revenue for the county’s general fund comes from taxes. For the fiscal year 2020-2021 budget, personal and property taxes from landowners in the county is expected to generate $79,772,620. The estimated tax revenue is derived by calculating the approximate value of all the taxable real estate in Chatham County and taxing it at a rate of $0.67 per $100 of assessed value. This is the same rate as FY 2019-2020, (additional tax rates apply for property located in towns and special districts).

The next biggest chunk of revenue comes from “transfers in.” These transfers come from a variety of sources, but in layman’s terms, they are special savings accounts for specific purposes. These include accounts for debt payments, capital improvement projects and other “reserve” accounts. This year, the county is transferring $16,046,994 from reserve accounts.

Sales tax revenue is the next largest contributor to the county’s overall budget, estimated to bring in $15,756,611 to the county’s coffers. Another $9,949,175 in revenue comes from intergovernmental transfers. These are funds that are like a cost share the county has with the state and federal governments. These include social services reimbursements, lottery proceeds, court fees and ABC and beer and wine revenues.

The county also anticipates $2,441,711 for charges for services and another $1,874,990 for permits and fees. The remaining revenue come from a variety of sources such as interest, licensing fees and other miscellaneous sources such surplus sales and rental revenues.

The enterprise funds for water and trash are generally self-supported. A majority of the revenues comes from fees and payments for the services provided. They also receive revenue via intergovernmental transfer for taxes for specialty recycling programs and grants.

WHERE DOES THE MONEY GO?

This is where the budget process can get a little more complicated.

The county divides its general fund budget into six categories – administration, culture/education/recreation, general government, human services, natural resources management and public safety – rather than by department. This can make it somewhat difficult to track the actual budgets for departments. For example, funding for the county manager’s office is under administration. But that budget includes the salaries for twenty four members of different departments whose job is to “liaise” with the county manager, according to Kara Dudley, Chatham County’s Public Information Officer. Dudley said that many of those salaries included in the county manager’s budget are department heads, but not exclusively.

In the future, we will take deeper dives into each of the categories and individual departments, but for today, let’s look at an overview.

The county defines the administration category as one that “includes departments that provide support for departments that deliver services.” It includes subcategories for the county manager’s office, the county attorney, court facilities, facilities management, the county’s vehicle fleet, finance, human resources, the Chatham County Agriculture and Conference Center, and the county’s technology and mapping divisions. The total budget for administration is $26,060,324, about 19.7% of the total general fund budget.

At $53,892,043, the culture/education/ recreation category represents the largest percentage of the county’s annual budget at 47.1%. This category is defined by the county as including “departments that provide education, library services, and recreation.” While the category includes parks, library and Central Carolina Community College funding, education is by far the largest chunk of that portion of the budget at $47,756,389.

The general government section of the budget is defined by the county as including “departments that carry out mandated functions and support the overall governance of the county.” With an annual budget of $3,705,032, it represents the smallest portion of the total general fund budget at just over 2%. It includes the budgets for the elections office, the governing body (Board of Commissioners), the Register of Deeds and Tax Offices.

The human services category represents about 14.3% of the overall budget at $18,943,584. The category includes portions of the health department, the department of social services, funding for outside entities such as Council on Aging, Chatham Trades and Chatham Transit as well as all funding for nonprofit organizations.

Natural resource management is somewhat of a categorical hodge-podge and includes “departments that regulate and permit development or are charged with increasing certain types of development, such as tourism or economic development.” The category’s budget of $4,773,519 is used to support central permitting, the convention and visitor’s bureau, the Chatham County Economic Development Corporation, the planning department, soil and water and watershed protection.

The final category is public safety, with a budget of $24,961,108 – which is approximately 18.8% of the overall budget. This category includes additional court services costs, emergency communications and operations, emergency medical services, fire inspections as well as the Sheriff’s Office which covers not only the office itself, but the detention center and the animal shelter.

According to Kara Dudley, Chatham County’s Public Information Officer, the categories have remained mostly stable over the years. At the same time, some departments within those categories may have been enlarged, rearranged or discontinued. For example, in the recent budget, animal services moved from the Human Services category, where it was managed by the health department, to the public safety category under the Sheriff.

As this series on the budget progresses, we will explore the process for the creating the budget, what gets funded and not funded, the philosophy behind the budget, the capital improvement plan, the short term and long term debt, the funds held in reserve, the sales tax revenues, the county’s tax base and of course the numbers.

For example, over the past 10 years, the county’s tax base, or the total amount of assets that can be taxed, has grown from approximately $8.8 billion to $11.9 billion which is a 37% increase, while the general fund has increased 60% in that timeframe from: $82.9 million to $132 million.

In fact, since fiscal 2015-2016 these revenues have increased by more than $20 million, which is a direct result of new tax base being developed and added from Pittsboro north toward Chapel Hill and Durham and Pittsboro east toward Apex and Cary.

We look forward to working on this series over the next year.

If you have an area or section of the budget that you want explored please email us at news@chathamcountyline.org.