The Apple of Chatham’s Eye 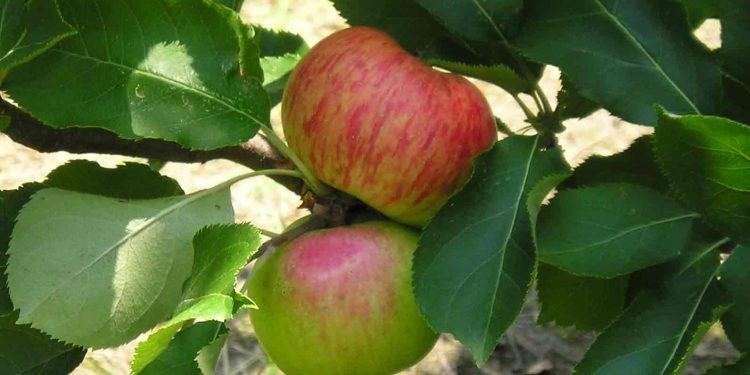 Apples were first brought to the United States by European settlers as early as the 1600’s. Over time, the fruit was cultivated throughout the colonies, with unique varieties developing prolifically in the south. It is estimated that at one point there were more than 3,000 different varieties of apples being grown in the U.S. As populations grew, bringing new development, strains of apples were lost forever.

This history wasn’t yet known to Calhoun when he moved to Pittsboro with his wife, Edith, in the early 1980’s. Calhoun simply wanted to grow some fruit trees in his garden. In the past, Calhoun said that an interaction with an elderly man in the area was where he first learned of varieties of what he called “old-timey” apples. When Calhoun searched to add those trees to his garden, he had no luck, realizing that those varieties may have been lost to time. This realization prompted what would become a life’s work and legacy for Calhoun, who was later called “the Savior of Southern apples.”

Over the decades, he and his wife traveled the south, searching for heritage apple trees on old farms and homesteads, grafting limbs to propagate new trees. He eventually preserved 400 varieties, building a nursery, helping to create an heirloom apple orchard at the Southern Heritage Apple Orchard at Horne Creek. He also wrote a book, Old Southern Apples, which not only outlines 1,600 distinct southern apple varieties, but provides historical context for each based on his collections of oral histories from the farmers he met along the way.

“It is fitting to honor Lee on Chatham’s historic birthday because he and Edith did so much to bring a positive spotlight on the Southern apples’ history, its people, and its legacy in the nation,” David Vernon, owner of Century Farm Orchards said.

Another piece of Calhoun’s legacy is Century Farm Orchards, the nursery Chatham County partnered with for the 250th Anniversary event. Vernon, the farm’s owner, first met Calhoun when he discovered apples on his family’s ancestral farm. Calhoun shared his knowledge about grafting apple trees, saving the species. Calhoun later shared the entirety of his varieties of apples with Vernon. This act not only helped to preserve the apples, but also allowed the farm to live on as it converted to a nursery specializing in old Southern apple and pear breeds. According to the county, the North Carolina Department of Agriculture recognized the farm for being in the family for more than one hundred years, which is the reason why Vernon chose Century Farm Orchards as its name.

“In planting the southern heirloom trees, particularly the Aunt Rachel variety, we are celebrating the rich history of our great and unique county,” says Dr. Carl Thompson, Chatham 250 Co-Chair and Senior Pastor at Word of Life Christian Outreach Center. “The excellence and uniqueness of the fruit reminds me of the excellence and uniqueness of Chatham County. As we plant these heirloom trees, and they produce fruit in the years to come, my hope is that we’ll look back on a most poignant and memorable 250th celebration and be mindful of how blessed we are to live in such a wonderful place!”

With that spirit in mind, the county partnered with Vernon and Century Farm Orchards originally to make 100 Aunt Rachel apple trees available to Chatham County residents, along with a pollinator tree, for less than 50 dollars. The event, which was originally scheduled to conclude in mid-September, was so successful that it was expanded to 180 Aunt Rachel apple tree packages, which sold out in just ten days!

“The Chatham 250 Plant a Tree sale sold out in less than ten days, which was honestly of little surprise to us,” said Hillary Pollan, Community Partners Analyst with Chatham County that helped organize the program. “When the idea to offer old southern heirloom trees in honor of Chatham 250 first emerged in the early days of planning Chatham 250, the Chatham 250 co-chairs and I knew we had stumbled on something that would resonate deeply with Chathammites. This Chatham 250 Plant a Tree sale ties together county residents’ love for history and heritage, sustainable agriculture, natural environment, and community. We’re humbled to see how well received this opportunity has been received by the community, and excited to be a part of preserving this unique and beautiful piece of Chatham County’s history into the future.”

Given the success of the program, it is clear that Chatham County residents are keen to preserve not only the rural history and landscape of the county, but its unique history. Residents who are interested in southern heirloom varieties to add to their property can contact Century Farm Orchards to learn more. Century Farm Orchards is located in Reidsville and can be reached by phone at 336-349-5709, by email at david@centuryfarmorchards.com, or at its website at centuryfarmorchards.com.

Siler City Elections to be Held in ...

The Wealth of Nature