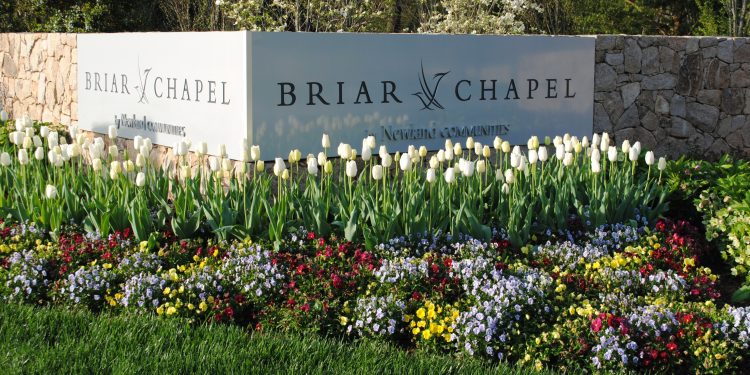 BRIAR CHAPEL — For years, private wastewater operations in northeastern Chatham have been undermined by perpetual system failures that bathe communities in leakage and sewage smell.

But as development continues and facilities near capacity, realistic solutions to the longstanding issues are not forthcoming.

Faulty facilities with stressed capacity limits have plagued several of the county’s unincorporated neighborhoods, but none more severely than Briar Chapel.

More than 87,000 gallons of sewage have spilled from the community’s private plant between 32 different leaks since 2016, according to the N.C. Dept. of Environmental Quality.

When sewage is not spilling into yards and onto streets, residents still make frequent complaints of pervasive odors and smaller spills which contaminate surrounding areas, according to reports filed with the State of North Carolina Utilities Commission and the county’s board of commissioners.

“Wastewater has long been identified as a significant need in the northeastern section of the county to ensure the area is developed in a smart, thoughtful and desirable manner,” said Lee Bowman, principal at The Legion Company, a real estate development, operations and advisory service in Chatham.

But developers, facility operators and residents can’t agree on how best to meet demand. Historically, there have been two major wastewater operators in the county, each responsible for management of independent sewer facilities in several the county’s unincorporated developments.

The biggest is Aqua America, which oversees private sewage plants in Governor’s Club, Chapel Ridge and North Chatham Village, among others. In Briar Chapel and parts of Chatham Park, Envirolink cared for wastewater management in partnership with Old North State Water Company for most of the sewage system’s life.

As of August, Briar Chapel’s treatment plant has been operated by Greener EHS Solutions.

In North Chatham’s unincorporated communities, such as Briar Chapel, residents face at least two problems with their wastewater treatment: new developments threaten to stress capacity limits if new connections are established to the already fragile systems, and treatment facilities located in the center of neighborhoods subject surrounding homes to foul odors and sewer leakage.

“The problem is how the system was designed and implemented,” said Liz Rolison, a representative of Stop Chatham North, a non-profit association representing concerned homeowners within Briar Chapel.

“Our developer chose to locate the (wastewater treatment plant) at one of the highest elevations within our community, located centrally near homes and amenities,” Rolison told the News + Record. “All of the wastewater must be pumped uphill to the plant. Unfortunately, the pipes that carry the sewage were installed with standard PVC piping, instead of the more robust iron or HDPE piping. The intermittent pressure from the pumping has caused the pipes to break — causing the majority of the 32 spills …”

To sidestep perpetual issues, some have proposed that Chatham County build a regional wastewater treatment facility to supplant private operations in North Chatham neighborhoods, as the News + Record explored in the previous installment of this series.

“Developers do not want to build their own sewage facilities,” said Chris Ehrenfeld, who owns Chapel Hill-based development company, Bold Construction, which frequently operates in Chatham. (Ehrenfeld is also a partner in Chatham Media Group LLC, the owner of the News + Record.)

“If we had a county sewer system years ago, there would be less of these individual systems that are having issues,” he said. “With our market growing, now is a great time for a county sewer system to capture new development before they build their own systems. In addition, many of the older systems would tap into a county system when they are due for an upgrade.”

The county’s answer to such calls: don’t count on it.

“They have invested millions in that,” County Manager Dan LaMontagne said of the private wastewater developers and operators in northeast Chatham. “Would they love to wash their hands of that and have the county buy it? Maybe. Is the county going to use its dollars to buy the infrastructure they put in there? Probably not.”

Instead, the county expects private operators to meet growing demand.

“Even in more recent long-range planning,” Bowman said, “… the county assumed that the private sector would take responsibility for developing sewer, rather than have the county build a regional facility which some have proposed.”

An intermediate solution, then, could be for wastewater treatment plants from adjacent North Chatham communities to connect their facilities, establishing a private regional plant. But residents have vehemently objected.

Without a regional plant — either county-run or privately operated — the only remaining solution is for operators to renovate and expand their facilities to meet each neighborhood’s demand. It’s unclear if Greener EHS Solutions has plans to enhance its facility in Briar Chapel. The News + Record’s could not reach a company representative for comment.

If the company does modify Briar Chapel’s wastewater plant — and if other operators make similar enhancements at Chatham’s other privately run systems — users will almost surely see the expense reflected in their rates.

“The only way private utility systems can recover infrastructure upgrades or other investment is through their rate base,” Bowman said. “That’s the downside of having a stagnant customer base — with no option for new users, the existing rate payers will be the ones to solely absorb those added costs.”

“As updates are made to private utility systems,” he added, “users may find that their rates increase significantly as standalones. It’s essentially an economy of scale, therefore being connected with a larger user base would create more stability for rates.”

Bowman knows from whence he speaks. Before starting his own company, he worked as the senior project manager for the Triangle at Newland, Briar Chapel’s developer, from 2005 to 2019. Afterward, he spent about a year as director of project and corporate development at Envirolink.

But Bowman is also a Briar Chapel homeowner, and thereby uniquely familiar with the concerns on both sides of North Chatham’s sewer kerfuffle.

“It’s been extremely frustrating and challenging for all parties involved,” Bowman said.

“As a resident of Briar Chapel and someone who worked in the development of this community, I can empathize with all sides of the problem. I think that everyone — from the homeowners to the HOA to the utility companies — are all wanting to do the right thing and trying to help move things forward, but sometimes emotions can limit progress.”

Apprehension about a private regional wastewater plant is understandable, Bowman says, and there is merit to the arguments against it. But the way sewer operates now — with each neighborhood served by an independent facility — the issues that have plagued North Chatham’s neighborhoods are almost sure to continue.

“Chatham is a growing area and as new developers invest in this area they will have to build more standalone systems because there is no regional option,” Bowman said. “As more of these standalone systems emerge, you will hear of more operational concerns, regulatory challenges, a lack of efficiency and rising rates. It’s tough — it’s really tough for everybody involved.”