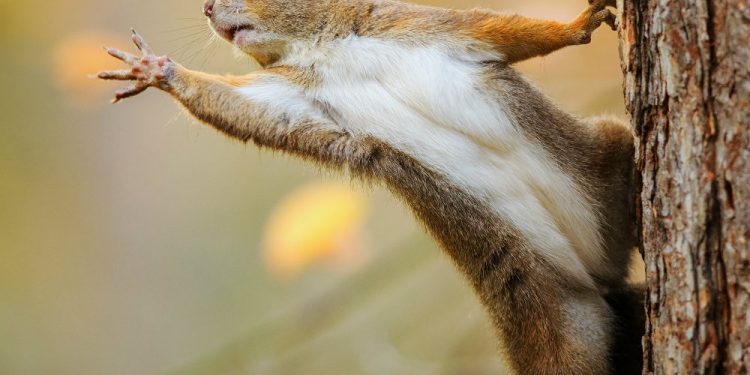 Squirrels are ubiquitous. You may love them, as did a friend of mine who transformed her yard into a squirrel haven, or you may consider them a pesky rodent that must be banished from your yard. But the truth is squirrels exist on all continents except for Antarctica. (Some might say that shows some wisdom on the part of the 100 species of squirrels.) They are among the most adaptable animals in the world.

In North Carolina we coexist with five native species: gray, red, fox, southern flying, and northern flying squirrels. The gray squirrel was adopted as the state mammal in 1967.

They are mostly active in the day and do not hibernate but curl up in their nests when it is cold. Many of us have been ‘scolded’ by squirrels – they are very vocal, communicating by barks, chattering, screams, and purrs. They expand their communication repertoire with tail flicks and stomping feet.

If you hear a squirrel make a chirping noise, possibly accompanied by a rapid flick of their tail, the squirrel is saying Back off! They may do this when another squirrel is near-by, or if your dog, a potential predator, is with you.

Like other rodents, a squirrel’s teeth never stop growing, resulting in constant chewing to keep their teeth in check. Their tails provide balance as they travel in treetops and act as a parachute should they fall. In fact, a squirrel can fall from up to 100 feet without being injured.

Even though many consider them a nuisance because they raid bird feeders, chew on everything, dig up bulbs, and sometimes nest in attics, squirrels have an important ecological role, especially in forest ecosystems.

My friend described it this way: the forest is the casino and the gambler squirrel buries seeds all over the casino. Inevitably the squirrel forgets where many seeds are buried and the house (forest) wins. In this process squirrels shape plant composition in the forest. They have an important role in maintaining the native long-leaf pine ecosystem.

Just the same, none of us want squirrels gnawing on our siding or living in our attics. Removing squirrels from your yard doesn’t really solve the problem – another squirrel will just move in. But here are some options to keep them under control:

Install electronic deterrents which use sudden bursts of water to scare them aware. Multiple devices may be used to create a squirrel barrier.

Use taste deterrents which cause a strong irritation. Pepper-based deterrents are considered highly effective. When planting bulbs, dip them in repellent and then cover them with a thick layer of sharp mulch.

Install ¼” galvanized wire mesh fencing in front of structural openings, underneath porches and around vegetation to exclude squirrels from these areas:

Create an “L”-shaped barrier to exclude squirrels from foundations or access to crawl spaces/porches. The mesh should penetrate the ground approximately 1 foot.

Construct a mesh cage around bulbs or even an etire garden to keep squirrels out.

If a squirrel does get into your building, act right away. Place a live trap in the room or between the walls where the squirrel is trapped, and close off all entryways. Or contact a pest control company to trap it. One squirrel can have 5 kits every six months, so don’t put off evicting them.

Does Your Creative Life Need a Tune ...