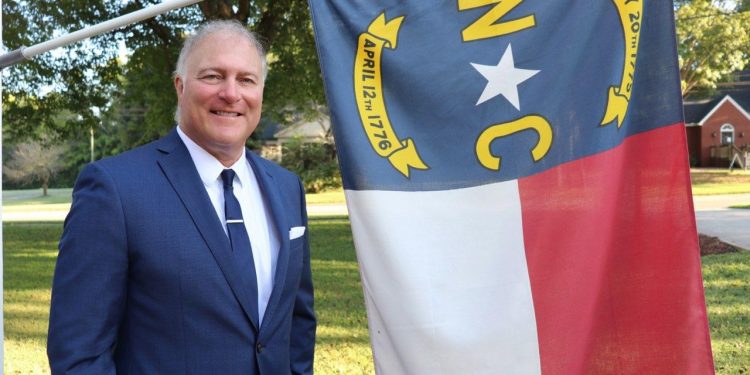 Todd Roper could be working at the fiberglass plant in Snellville, GA right now. But in early September, N.C. Governor Roy announced Roper, 30-year resident and attorney in Chatham County, was appointed to fill the District 15B Judicial seat left vacant by the retirement of long-time Chief Judge Joe Buckner.

Roper grew up in Snellville, a town Northeast of Atlanta near Stone Mountain. At the time, Roper said the town was basically “a caution light and a gas station.” All of his family were blue collar folks, but his father wanted more than working at the local fiberglass plant as the rest of his family did. He worked hard and studied and received a degree from Georgia Tech to be an engineer.

“Daddy always wanted more,” Roper said. “He instilled in me that school is first, before sports, and that’s how the household ran.”

Roper was a member of the last recruiting class in 1981 for legendary football Coach Paul “Bear” Bryant at the University of Alabama. After college, he received his law degree from the Cumberland School of Law in Birmingham. He worked for a number of firms while in law school, something that Roper said showed him what kind of lawyer he wanted to be.

“I’ve never been a city lawyer,” Roper said. “[Working at law firms in Birmingham], it looked like everyone was trying to step on someone else just to get a better position in the firm.”

“I realized early,” Roper said. “Growing up in Snellville, I was used to knowing everybody in town and being part of the town. I wanted to be a lawyer in a small town and I figured it out in law school working with big firms.”

So he sought out another option with the University when they pulled out “a big book” of law firms looking for associates. He described the book as having three tabs — large firms, medium firms and small firms.

Flipping to the “small tab” he saw three options. The first one was in Knoxville and being an Alabama alum and former football player he quickly decided that would not be an option.

The second firm was in Sarasota, FL. And while Florida was technically in the south, he still wasn’t interested in going to Sarasota. The last possibility was Siler City, NC, with the small firm Moody and Williams owned by Jack Moody and Sam Williams.

He first visited Siler City in 1989, meeting Moody and Williams, who offered him the opportunity to try his own cases with the chance for partnership in three years, something that was attractive to Roper. Shortly after that, he packed up the few things he had – a couple of chairs, a TV, a small bed and a desk – into the back of a Hart’s Furniture truck that Moody had arranged to bring him from Birmingham to Siler City.

Moody, a former legislator, then introduced Roper to his local church, his local bank, the local Ruritan Club, the local Rotary Club and every civic leader in Chatham County. And that was it. Over the next 30 years, Roper would become part of the community, raising three daughters, coaching little league and high school sports, all the while serving defendants at the Siler City firm now known as Moody, Williams, Roper and Lee.

Last month, when District Court Judge Joe Buckner announced his retirement, Roper put his name into the hat for the appointment, a decision held by statute to be determined by the Governor, Roy Cooper. With his appointment by the Governor, Roper will be sworn into that role officially and begin serving as a District Court Judge at the end of October.

“It’s truly about service,” Roper said. “It’s about helping people, people in the community, people I love, people I’ve worked with over the years.”

In his years as a local attorney, Roper has worked on the types of cases that are decided in district court — criminal, domestic violence, custody agreements — from “both sides of the table.”

He hasn’t won every case, but has learned how to earn the respect of his colleagues and those in the judicial system. He believes this begins with preparation and a full understanding of all the aspects of the process.

“I care for people,” Roper said. “I have compassion. I’ve seen the circumstances from where people come. Each person’s case is an individual case and needs to be looked at that way. The key is to be fair. And a judge needs to listen, to be interested and to bring all those experiences to the table to make fair, reasonable, impartial decisions.”

In his new role, Roper also wants to do more than just adjudicate. He wants to educate.

“There’s a lack of public trust right now in the judiciary,” Roper said. “I want to help people learn about the system. I want to be out there in the public and bring public awareness of what we do.”

Roper spoke about mock trials for elementary and middle school students as well as mentoring programs for high school students. He also wants to take an active role in community and civic organizations to help educate the community on the role and actions of the system.

The process of getting appointed to the open seat was not easy and a number of excellent candidates expressed interest. Roper was able to win support from the local bar association as well as a number of other key groups such as the Chatham County Democratic Party and key individuals such as Rep. Robert Reives II (D-54).

The 15B district currently has five seats with Judge Sherri Murrell residing in Chatham while Judges Samantha Cabe, Hathaway Pendergrass, and Beverley Scarlett all reside in Orange County. The seat Roper is filling will be up for re-election in 2022.

Roper’s long tenure and commitment to Chatham County was a factor in some of the support he received.

County Commissioner Jim Crawford wrote to the Governor that “Judge Joe Buckner’s tenure balanced Chatham and Orange communities; his family is from Chatham, and he has lived and worked in Orange. Appointing Roper maintains the vital Chatham interest on the shared bench…geographically, Chatham County represents the area of most rapid growth in the two-county district of 15-B. Todd Roper has practiced law in the community where change is happening. He is known and endorsed by our sheriff, clerk of court, sitting judges, district attorney, political leaders, and many lawyers at the bar. Collectively, they deal with Chatham’s growth issues on a daily basis, and need to have a knowledgeable, familiar mind on the bench.”

Roper realizes that, as a Chatham resident, he will need to acclimate himself to the citizens of Orange County as well since the community he serves is now larger.

“I’ve been here 30 years,” Roper said. “I love the people in this community. They are compassionate, good people. And when you love a community, you become part of that community. Which is what I will continue to do.”