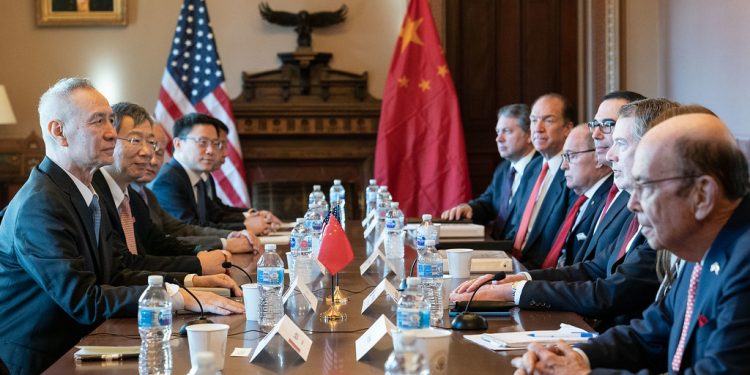 In about the mid-1980s, I was associated with the US-Japan student exchange and technology development program at Northwestern University in Evanston, Il.  The talk of the town then was Japan was not only ahead of us but was about to buy out the United States “wholesale.”  Come the decade of the 1990s, President Bill Clinton initiated China’s membership in the World Trade Organization (WTO).  In less than a decade, Japan was unceremoniously replaced by China as our main trading partner, and rival. Techno-economic partnership with China was considered our most formidable and profitable global policy initiative by the subsequent Democratic and Republican administrations in Washington.  Our manufacturing companies gladly shipped our production technologies offshore, mainly to China, to cut labor costs from over $15-20 per hour to less than $5 per hour over there.  China became the top exporter of consumer goods to America, as elsewhere.  It also became the net importer of our animal and agricultural products to feed a population of over a billion people.

During the decades of the 1990s through the early 2020s, our top universities were recruiting Chinese graduate students in science and engineering programs, assuming that their survival depended upon these (and other) foreign students. Some of these students are reported to have pirated valuable American and western scientific know-how for the benefit of the “sarkari” (i.e., the government) science in China.  Furthermore, Confucius institutes were established in many American universities. They were “meant” to promote Chinese-American cultural exchange.  But they were also criticized for aiding and abetting military-industrial espionage on behalf of the Chinese government.

With enormous trade dividends from the United States, Europe, Australia, and elsewhere, China quietly built its military industrial complex.   It also launched the Belt & Road initiative for international techno-economic development to rival that of the United States.  The PRC today is not only the second largest global economy but also a formidable “nuclear-powered military machine,” arguably next to that only of the United States’ and to that of  its “partner in arms,” Russia.

Calling names and blaming China for this and that—viruses, espionage, human rights violations, et.c—may be meaningful but is not helpful in the short and long runs.  China is way too big and powerful to be affected by that kind of rhetoric alone.  Let us recognize, perhaps grudgingly, that the post-Tiananmen Square China (1989-90) is a formidable global rival of the centuries’ old Euro-American military and industrial hegemony.  Modern-day nation states exist in a multipolar world long recognized by more formidable scholars than me. “It is the global economy, stupid,” where healthy competition and cooperation seem the only way for the future of nations.  Our global clout as “the leader of the free world” depends upon our commitment to continuous innovation, global security, and local and global economic welfare. We need to rival China in all these measures.  We need to counter China’s Belt & Road initiative by our own global development programs – as has been our commitment since the end of the Second World War.  And most importantly, let us stop competing with China, or any other country, in the mindless and expensive arms race with no endgame. Rather, let us follow the advice of the smartest man who sat in Lincoln’s desk in the Oval Office since the Great Emancipator himself, President John F. Kennedy:

“To those people in the huts and villages of half the globe struggling to break the bonds of mass misery, we pledge our best efforts to help them help themselves. If a free society cannot help the many who are poor, it cannot save the many who are rich.”

Dr. Aqueil Ahmad is an international scholar, retired from the Walden University School of Management. He is the author of 6 books and 59 journal articles. His fields of interest include globalization, science and technology policy, social and cultural change, and peace and nonviolence.

Where Do You ‘Scratch’ for New Ideas?