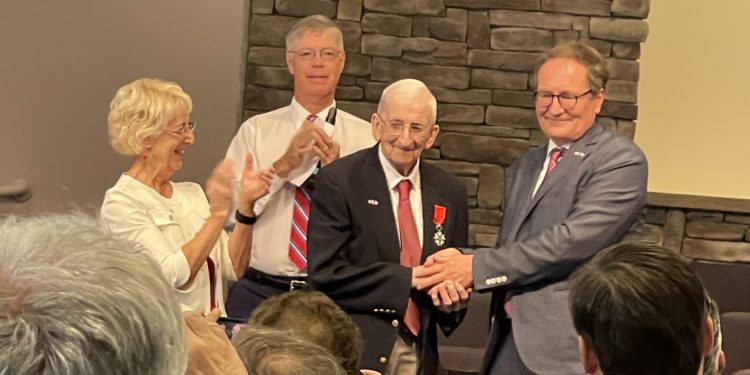 New Salem Church on Old Graham Road in Pittsboro was filled with people on Thursday, August 12, to witness the award ceremony of World War II veteran and Pittsboro resident Wesley Hart. Hart was honored with the Legion of Honor, France’s highest honor, for his service to France during the war. Hart, who is 102 years old, is one of the more than 2 million Americans that served in Europe at the time.

Hart enlisted in the U.S. Army in 1941, but it wasn’t until 1944 that he landed on Omaha Beach as an advance team of the 102nd Infantry. He and his fellow soldiers were charged with clearing beaches and roadways in advance of the division’s arrival. Hart also served in the 802nd Ordinance Company supporting frontline troops and their supply lines from Normandy to the frontlines. Previously, Hart had been awarded the Bronze Star Medal, the European Theatre Ribbon with three battle stars, the American Defense Service Medal, the American Theatre Ribbon, and the World War II Victory Medal among other awards.

The Legion of Honor was presented to Hart by Vincent Hommeril, the Consul General of France in Atlanta on behalf of the French President Emmanuel Macron. The honor was established in 1802 by Napoleon Bonaparte to be bestowed upon those who have served France or its ideals. Hommeril noted that even though 70 years has passed, France still wants to honor those that “risked their lives for the freedom of France and of Europe” forming a “French and American friendship” that is “bound in blood.”

“Your legacy will provide a moral compass for years to come,” Hommeril said.

Though a hero to France and to all in the church that day, to his two daughters, he was Dad. Daughters, Lynne Dyer and Kathy Wakeman shared their stories of their father with those gathered.

Dyer noted that her father never “boasted” about his time during the war and, in fact, rarely spoke of it until about 20 years ago. About a year ago, Hart had begun voicing interest in preserving his stories from that time. With the help of his daughters, he published a book, “WWII, My words” full of personal stories and photos from the time. She described him as “fearlessly loyal,” “generous,” and the “can do it, dude” –a man who shared his many talents with those around him.

“He’s a man to be admired and treasured,” Dyer said. “Thank you for being our wonderful Dad.”

Hart was also presented an American flag that had flown atop the Capital Building in Washington, D.C. at the behest of Sen. Richard Burr.

The Wealth of Nature