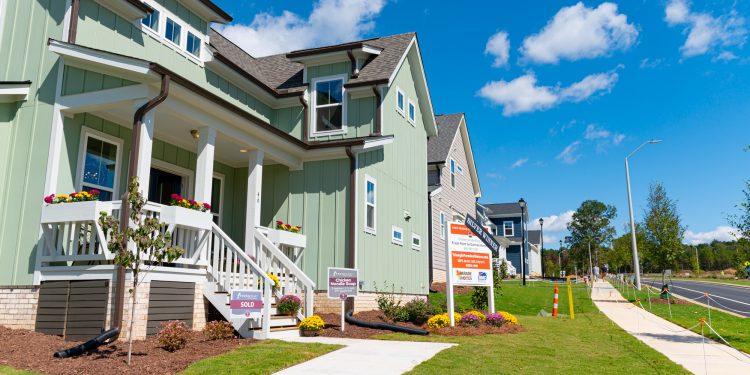 The Vineyards, the first residential community built in Chatham Park, hosted thousands of people over the three weeks of Parade of Homes. In addition to exposing potential homebuyers to Pittsboro and the new community, two of the homes were also awarded Gold and Silver awards by the Home Builders Association of Durham, Orange and Chatham Counties.

The first phase of the Vineyards’ community included cottage-style homes ranging from 850-1,200 square-feet which began construction this past spring. The cottages were developed in partnership with Garman Homes of Cary. Two of those homes, the Apple Pie and Chicken Noodle Soup models, won the honors.

“We could not be more excited about our first completed homes winning awards of excellence. The Parade Of Homes is quite competitive and awards are coveted. Fresh Paint by Garman Homes has been a great partner and we look forward to working with them more in the future,” says Vanessa Jenkins, Executive Vice President, Preston Development Company.

Alaina Money Garman, Founder and CEO of Garman Homes adds, “It is such an honor to have two of our newest floor plans in the 2020 Parade of Homes and an even greater honor to have them both win an award. Our team has worked hard to create something unique for the Triangle marketplace, it’s great to have that work recognized by the judges.”

The cottages seem to be a hit with more than just industry judges, but also with home buyers. 20 of the 30 available cottages have been purchased. The developers believe that quick sales are a result of a larger consumer trends showing that more people are looking for smaller homes in order to achieve other goals which include walkability and a sense of community. The community is within walking distance of downtown Pittsboro, includes connective walking trails and greenways, and is nestled adjacent to residential areas in Pittsboro.

“More and more people are purging their clutter and desiring spaces that are artfully designed to the way they want to live. The Cottages celebrate this lifestyle choice,” says Rebecca McAdoo, Division President of Fresh Paint by Garman Homes.

Though the Vineyards were open and featured throughout the three weekends of the Parade of Homes, the community hosted a special event on Saturday, Oct. 3 to introduce the community to the Vineyards. The event included a tram to provide tours of the community, free food and Chippy, the Chatham Park mascot.

During the Parade of Homes event, visitors were able to view the phase one cottages as well as some of the custom built homes that are part of the Vineyards’ second phase of construction. Each of the 27 custom built single-family homes will have a designs similar to the Vineyards’ information center which is a modern prairie, designed by Tony Frazier of Frazier Home Design.

Guests to the Parade of Homes were not only able to visit the homes, but also the 10-acre Knight Family Community Park, the first of several parks Chatham Park will be constructing and handing over to the town of Pittsboro for public use. That park includes amenities for a variety of ages, a shelter and a splash pad to be installed once the weather warms next year.

Guests came from within and around Chatham County to see the first of the communities that will one day make up the 7,000-acre planned development.

“It was a nice day and Pittsboro is cute,” Joan Davis of Durham said. “I had heard about this and saw the layouts online. I like it so far, they are really nice designs.”

Julia Burton of Raleigh also had heard about Chatham Park’s first residential development and wanted to “see what they had going on.”

Guests from Mebane, Clayton, Raleigh and beyond noted the “innovative designs” of the cottages, but also of the community including electric car charging stations, trails and community connectivity.

The Vineyards has had another 180 lots that have been approved by the Town of Pittsboro as well as several additional phases planned that have not yet gone through the approval process. The company anticipates about 500 homes being constructed a year over the next 30 years while also working on the development of commercial, industrial and mixed-use properties. At the same time, Chatham Park is working with the town, county and the Board of Education on sites within the Chatham Park boundaries for schools, additional parks, and public services locations.