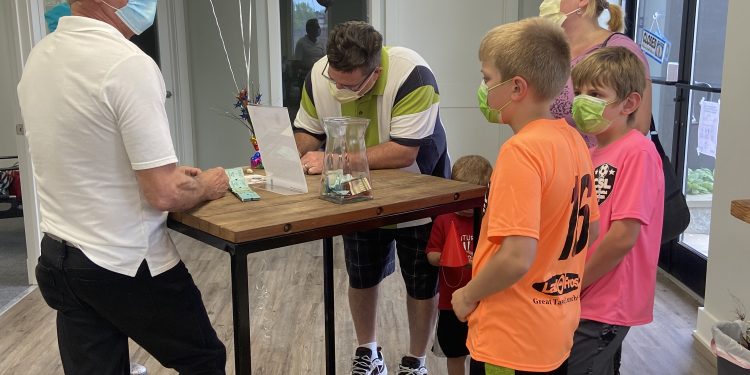 Main Street Pittsboro hosted a mixer for downtown business and property owners on Tuesday, June 15th to provide an update on the work the organization has completed and its future plans.

“The goal is to educate downtown business and property owners about the district,” said Kevin Maley, Pittsboro Main Street Board member. “There’s a lot of work that’s been done and not everyone knows about it. Everyone knows about the traffic circle, but this is a chance to see all we have in process and the overall plans, both short- and long-term.”

The event, which was held in the core of Pittsboro’s Main Street District at the Postal Fish Company, was attended by more than 80 stakeholders. The event was emceed by Randy Voller, a Main Street Pittsboro Board member and former Mayor of Pittsboro. He began the presentation by explaining the mission of the Main Street Program and how Pittsboro became a participant.

The program was first approved by the State for the Town of Pittsboro in 2011 when the Town became a Small Town Main Street member of the statewide coordinated program that supports local efforts to improve and revitalize downtown districts or main streets districts.

The Town of Pittsboro originally ran the program through its Parks and Recreation Department and focused mainly on facade grants. After losing steam, a group led by current Mayor Jim Nass, Town Commissioner Mike Fiocco, former Chatham County Economic Developement Chairman Doug Emmons, downtown business and building owner Kitty Meacham, restaurant owners Maria and Greg Lewis, and Chatham Arts Council board member Lesley Landis began meeting in 2017 to re-energize the program. They later added Randy Voller to its board and became a registered non-profit in 2018 called Main Street Pittsboro. The Main Street Program is currently operated through a Memorandum of Understanding (MOU) with the Town of Pittsboro, which is how a majority of such programs operate in North Carolina,

There are 67 Main Street programs across the state with 64 receiving public funds averaging $197,304 per year. Many of these programs augment the public funds with private donations as well as through the implementation of a Municipal Service District. Pittsboro funds its program annually through allocations in its budget. For FY 2020-2021 the Town provided $15,000 for facade grants and $81,000 for its program. For FY 2021-2022 the Town provided $0 for facade grants (there was an aggregate carryover balance from the previous fiscal year) and cut its funding for the program by 19.8% to $65,000.

Main Street Pittsboro is a volunteer-driven organization with one part-time employee, Paul Sacca, who staffs the Welcome Center answering the questions of guests about various aspects of Chatham County. The Welcome Center is funded with public and private contributions and through events such as Local on Main, an event which highlights the food, spirits, and culinary artists in Chatham County.

Main Street Pittsboro focuses its efforts on a 61.5 acre contiguous area in downtown Pittsboro, whose properties have a tax value of nearly $66,000,000 or nearly $1,100,000 per acre, which is a 50% increase over the previous assessment.

Pittsboro Commissioner Michael Fiocco, also a Main Street Pittsboro Board member, noted that the organization has made a lot of improvements over its ten years. He cited the development of the Page Vernon Pocket Park, the addition of benches, new trash and recycling receptacles, seasonal banners, and handrails. While the Welcome Center and its colorful mural may be the most obvious physical changes, the group has also awarded 24 facade grants. The funds are matching grants for local businesses and property owners to improve the exteriors of downtown buildings.

Main Street Pittsboro President Maria Parker-Lewis noted that the traffic circle which is being renovated to create greater safety for pedestrians and improve the streetscape of downtown, while “frustrating,” is starting to look “really good.” And the project is the “first visual aspect of the Downtown Vision Plan,” an adaptable, guiding document for the continued invigoration of downtown. The Downtown Vision Plan was adopted by the Town of Pittsboro in 2014. (The Downtown Vision Plan is a 54-page document completed by Kimley-Horne and funded by a donation from Preston Development/Chatham Park. It can be viewed on the Town’s website.)

Parker-Lewis noted that the Welcome Center has received 567 visitors since it opened in March of this year despite the ongoing construction at the traffic circle and COVID. Those visitors include people not only from out of town visiting, but new homeowners wanting to learn about the area as well as those considering moving to the area.

“We want to say [to visitors to the Welcome Center], ‘thank you for coming to Pittsboro. We hope you stay a while,” Parker-Lewis said.

Pittsboro Town Manager Chris Kennedy shared a view on projects coming to downtown Pittsboro, such as the widening of 15-501 to Powell Place, the $19 million project to construct a new Town Hall which will be supported by USDA funding, and the Town’s wastewater expansion to increase capacity. All of these projects, Kennedy believes, show that the state is investing in Pittsboro and believes in its future—a future with a thriving downtown.

As the mixer event closed, conversations still continued and the excitement about the future grew.

“There are so many good projects, it’s hard to keep up,” Chatham County Board of Commissioners Chair Mike Dasher said. “And after a challenging year, we’re looking forward to more gatherings downtown and in the vicinity.”

Casey Mann can be reached at News@ChathamCountyLine.Org.