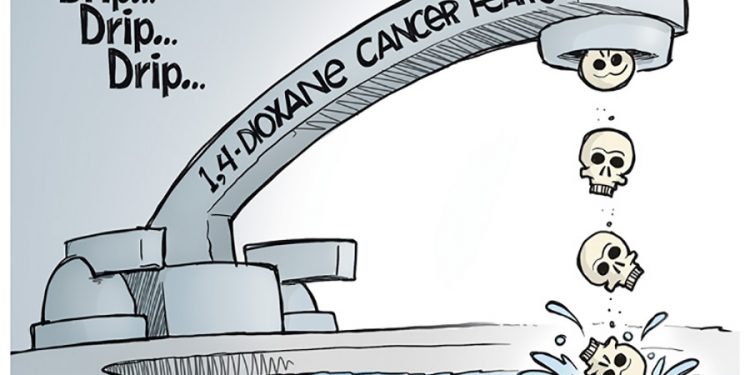 Basic infrastructure is desperately in need of updating and investment in Chatham County. Whether it’s universal access to broadband, which has been bottled up by legislation crafted by the Republican-run General Assembly since 2011, or more basic needs such as consistently safe drinking water and wastewater the County and its municipalities are facing pressures to meet demand and grow safely and smartly.

This means that the water plant and its operators will be dealing with the constant change in raw water that flows down the river from Greensboro—a situation that is challenging, but also problematic when raw water contains unregulated chemicals such as PFAS and 1,4 dioxane. (According to the EPA: “When 1,4-dioxane is used as a solvent stabilizer, the solvent itself is regulated as hazardous waste. When applied as an additive, 1,4-dioxane is not used for its solvent properties and does not meet the regulatory definition of solvent. 1,4-Dioxane generally is listed with a group of pollutants in state and federal guidance for air pollution control and release reporting and in water pollutant control and National Pollutant Discharge Elimination System (NPDES) permitting.”)

The Town of Pittsboro has done an admirable job over the years in managing a very difficult situation including the testing and studies of a variety of treatment options at the water treatment plant as well as the appointment of a citizen task force to study the issue and make recommendations to the Town Board.

And most recently, according to a NC Department of Environmental Quality press release and Lisa Sorg of the Progressive Pulse, the City of Greensboro released levels of 1,4-Dioxane that were 20 times higher than EPA recommended levels into the South Buffalo Creek which is a tributary of the Haw River. The contaminated discharge came from the city’s TZ Osborne Wastewater Treatment Plant while the source of the contamination was not disclosed.

Read press releases from the Town of Pittsboro about chemicals in the water here.

As problematic as the situation is with the potable water quality—a situation that ironically has improved since the old days when dyes were directly discharged upstream into the Haw River—Pittsboro and parts of Chatham have vexing challenges with wastewater that have been well documented by consultants hired by Chatham County to evaluate the challenges and make recommendations to the policy makers.

Currently the Town of Pittsboro operates an aging wastewater treatment plant (“WWTP”) that discharges into Robeson Creek and eventually into the Haw River and Jordan Lake.

A new wastewater treatment plant has been privately constructed on Business 64 that will operate under the Town’s permit and will mainly serve portions of Chatham Park.

The Town has been working on its plan to connect a two million gallon per day sewer line to Sanford. If there are no further delays it should be operational within 24 months. (This will change the operation of the current WWTP plant. The plant will still provide reuse water to 3M, but most of its discharge will shift to Sanford.)

Of course utility systems survive and thrive by adding customers and investing in their plants and distribution networks. Much like making coffee or beer, the production of water or the processing of wastewater benefit cost wise from economies of scale.

This is why many believe that the sewer line to Sanford should be enlarged to 4 or 6 millions per day and perhaps allow or plan for a connection from customers north of Pittsboro on the 15-501 corridor.

To that point it appears that OWSA is re-evaluating its long term plan and is conducting input sessions in August and September that will likely include discussions on whether to expand south down 15-501 from Orange County into Chatham County.

Of course the reason that these public utilities are investing in new infrastructure and evaluating options to expand is because they operate as enterprise funds which requires them to adhere to generally accepted accounting principles (GAAP) for annual external financial reporting.

Translation: they must be self-sustaining and run like a business. And like any business they need customers to survive and thrive and there exists an equilibrium point where they can provide the best price and value to their customers.

This brings us to the issue of private wastewater providers along the 15-501 corridor in Chatham County. Private wastewater providers need to operate at a profit and unlike public utilities must comply with further rules and regulations that are promulgated by the N.C. Utilities Commission. Many of these systems were specifically created to serve specific real estate developments such as Briar Chapel, Fearrington, or Governor’s Club, but file a map indicating their “service area” with the N.C. Utilities Commission.

Whether the system discharges reuse water and uses a sprayfield like Briar Chapel, processes waste and discharges into a creek like Fearrington or processes waste and discharges onto its golf course like Governor’s Club it will still suffer from the aging process which will ultimately impact the cost of operation. This is why these systems need new customers for potential capital investment as well as monthly income to operate and satisfy investors.

Translation: the rules and regulations favor expansion and a static customer base will eventually be forced to pay increasingly higher and higher monthly rates to operate the system.