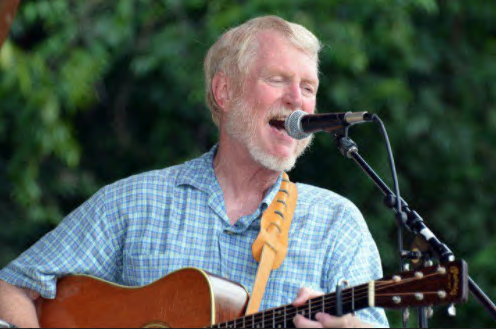 After a brief illness, coach, educator, musician, arts advocate, downtown Pittsboro business owner, and antiques aficionado Tommy Edwards died. He was recently memorialized at a celebration of life at the Fearrington Barn attended by friends from many of the chapters of his life.

I was sad to learn this morning of the passing of my friend Tommy Edwards of The Bluegrass Experience. For many reasons, the music scene here owes a great deal to Tommy and the rest of the guys in his band. First of all, they are founding members of that tribe of excellent musicians around here that we all probably now just take for granted. Their genre is traditional and bluegrass, but that tribe now includes almost every kind of music you can imagine.

To describe the early days of the Cat’s Cradle as fly-by-night or seat-of-the-pants would be kind. We were essentially clueless hippies who somehow managed to not get closed down, but not much else. Our banking was so careless that the beer companies made us pay in cash. Nobody would cash our payroll checks. Our book keeping was so lame that the North Carolina Department of Revenue had to send the hapless Mr. Lyons after us. He would come to my house and sit on my living room floor where Marcia and I would surround him with grocery bags full of wadded up receipts.

Two years ago, the Cradle celebrated its fiftieth anniversary. One of the reasons that it made it that far was Tommy Edwards and The Bluegrass Experience. Every Thursday night for our first eight or so years, they playedthere. No matter what else was going on, the cash we took in on those nights would get us through the week. We were always full on Thursdays. I think that there must have been a change of shifts at the hospital at about 8:30 at night because suddenly the place would be full of people in scrubs and nurse’s uniforms dancing wildly. They paid our rent.

So, when we all finally get back into the Cradle this summer, please take a minute and raise a glass to a fine musician and a good citizen. Adiós my friend.

Bill Smith was the chef at Crook’s Corner in Chapel Hill for nearly three decades until his retirement in 2019. Smith is well known for his food writing — including the New York Times Notable and Food & Wine Bestof-the-Best cookbook “Seasoned in the South” and the bestselling “Crabs & Oysters: Savor the South”.

How American Government is Rigged Against the ...