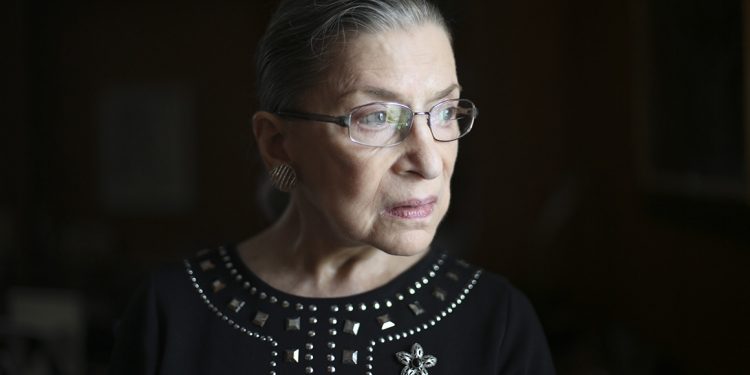 I found out from a text from my daughter.

The news fell on me like a great weight, pressing me down. Justice Ruth Bader Ginsburg, pioneer, women’s rights advocate and icon, had passed away on Friday, Sept. 18 at the age of 87.

My daughter, at 18 and just starting her adult life, felt the same weight of the loss and the importance of her legacy, knowing that her future would be full of very different possibilities had it not been for Ginsburg.

I began scouring social media, searching for reports on her passing and collectively mourning. Coincidentally a “memory” showed up in my notifications that resonated. Six years ago, I was in Washington, D.C. at a Women’s Leadership Forum. In a giant ballroom at some fancy hotel, hundreds of women gathered to meet, engage and learn from some of the most powerful women in the country – elected officials, media moguls, CEOs and more. An event that would never have been possible if it hadn’t been for the efforts made by Ginsburg for equality in America. She fought so we could excel.

Ginsburg’s mother, Celia, worked as a young woman to help support her family. Her wages were used to finance her brother’s education. A moment that had a dramatic impact on the future. When Celia got married and had a family of her own, she made sure to have in her will that her daughter, Ruth, would go to college and get an education. She would end up going to three institutions of higher learning.

Ginsburg went to Cornell where she met her husband, Martin. She then attended Harvard Law School in 1956 as just one of only nine women admitted. This gender imbalance famously incited the following notorious query directed from the Dean of the Law School to Ginsberg and her fellow female classmates, “Why are you at Harvard Law School, taking the place of a man?”

She would go on to be one of the first women to be in the Harvard Law Review. This despite the fact that she cared for her first child and her husband as he battled testicular cancer—efforts that helped him pass his classes.

She eventually had to transfer to the Columbia School of Law where she graduated at the top of her class. Even with those accolades, Ginsburg could not find work after graduating because at the time law firms and judges didn’t want to hire women. It took the efforts of a man, Gerald Gunther, Columbia professor of constitutional law and federal courts to put a crack in this glass ceiling.

Gunther threatened to never recommend another Columbia student to these judges and law firms if Ginsburg didn’t get a fair shake. Only then was she able to get the job as a law clerk for the U.S. District Court for the Southern District of New York where she clerked for Judge Edmund Palmieri.

From there she moved on to academia. She first worked at Rutgers Law School and upon her hiring was told she would be making less than her mail counterparts because her husband had a “well paid job.” Nonetheless, she taught law at the school for nine years, receiving tenure. Later she moved on to Columbia Law School where co-founded the first law journal dedicated exclusively to the rights of women. It was called the Women’s Rights Law Reporter. In addition she co-authored the first law school case book on sex discrimination.

But that was only the beginning.

In 1971, Ginsburg wrote her first brief to the Supreme Court of the United States in the case of Reed v. Reed. The court’s ruling in that case was the first to say the Equal Protection Clause of the 14th Amendment to the Constitution extended not only for equal treatment based on race, but to gender as well. Prior to then, the Court’s view of the equality of women was based on a Biblical notion that a woman’s place was to be in the home and subservient to her husband.

In short order Ginsburg would successfully argue cases in Federal Courts and the Supreme Court that would have profound impacts on equity between genders. She fought for a man’s right to have a caretaker deduction based on his gender; for female service members to receive equal housing allowances for their husband that male service members received for their wives; for widowers to receive survivor benefits equal to widows; and equal laws on drinking ages of the sexes—eventually increasing the basis of scrutiny gender discrimination cases received at the Supreme Court.

That’s a lot of weight to bear.

In 1980, she was appointed by President Jimmy Carter to the U.S. Court of Appeals for the District of Columbia Circuit. More than a decade later, in 1993, President Bill Clinton would appoint Ginsberg to the Supreme Court. She was only the second woman, after Sandra Day O’Connor, to be appointed to the high court. When O’Connor retired in 2006, Ginsburg was the lone female voice on the court with eight other men and what would follow would make her notorious.

She began writing dissents, fervently arguing against decisions she believed were unjust, especially cases that involved women’s rights. Her dissent in Ledbetter v. Goodyear in 2007, would inspire Congress to write and pass the Lilly Ledbetter Act of 2009. Lilly Ledbetter was a woman who worked for Goodyear as a supervisor for 19 years and as she neared retirement, she learned she had been paid thousands of dollars less than her male counterparts.

In the case, the conservative majority ruled that Ledbetter did not have a case because of a statute of limitations of 180 days, even though she had only recently found out about the disparity. Congress acted to reverse the high court’s decision, loosening the timeliness restrictions on filing discrimination claims. Ginsburg had a copy of the Lilly Ledbetter Act framed and hung in her office.

Then in June of 2013, a new generation would learn about Ginsburg. That year in a controversial 5-4 decision that the Atlantic Magazine later wrote in 2018 “broke America” the Supreme Court ruled in the Shelby County v. Holder case that it was unconstitutional to utilize the coverage formula in Section 4(b) of the Voting Rights Act of 1965 to determine which jurisdictions are subject to the preclearance requirement of Section 5 of the Voting Rights Act. This decision immediately sent out shock waves to the country and Ginsberg’s scathing dissent inspired Shana Knizhnik, a law student at the time, to create a social media thread based on the “Notorious RBG,” an allusion to the renowned hip hop artist the Notorious BIG.

That moment would cement Ginsburg as a pop culture icon, inspiring memes, t-shirts, Halloween costumes and children’s books, introducing her legacy to new generations and inspiring young women to strive and fight for equality not just for themselves, but for everyone in their community.

We, and the successive generations which were inspired by her, carry this weight.

Ginsburg fought until the end. Even on her deathbed, she dictated to her granddaughter, Clara Spera, a statement which read simply, “My most fervent wish is that I will not be replaced until a new president is installed.” Ginsburg was fully aware of the fallout of her passing. Within hours of her death, Senate Majority Leader Mitch McConnell announced the Senate would appoint her successor. Cold, callous and hypocritical, but hypocrisy has become such a mainstay of the cultural weight of the patriarchy, calling out such inconsistencies seems almost futile.

McConnell’s comment, poor timing aside, is in stark contrast to his feelings on appointing Supreme Court Justices during an election year under President Barack Obama. When Justice Antonin Scalia died in February 2016, by March, McConnell successfully argued that it would be inappropriate to appoint his successor during an election year.

At that time, the primaries were only just beginning with the General Election still eight months away. But apparently a month and a half from an election is fine as long as a Republican is president. This type of behavior, self-serving and self-centered demonstrates that although Ginsburg was able to move the dialogue and thoughts forward regarding fairness and justice in America we still have a long way to go.

Damn, do you feel that weight too?

Because of Ginsburg, I can get a credit card in my name, purchase property, attend college, get birth control and fight for equal pay. But we’re still not there. A woman is still paid less than a man, while expected to do and fulfill other support roles in the workplace and at home.

As a professional woman, I have been expected, in addition to my regular duties, to perform other duties that were not expected nor requested of my male counterparts. These duties included cleaning a break room, organizing office parties and otherwise “mothering” an office, all while trying to balance the challenge of raising two children as a single mother.

Strangely, instead of being celebrated or supported for the extra work the mere question of why I was expected to play homemaker at work as well as home was perceived as a thorn in the side of many of my former supervisors.

Concurrently my ideas have been stolen in public by the men I work for who often degraded them before ultimately using my ideas to their own benefit. I have spoken in meetings only to be ignored, then later hear a male counterpart say the same thing I said and be praised for the effort and idea.

I’ve been called “honey,” “girl,” and “sweetheart” to the point of wanting to punch someone in the jugular. And yet I fight on.

We all must fight on to share the weight, the collective weight that Ginsburg carried for us. It’s now up to us to stand up not only for ourselves, not only for women, but for all people who do not get to enjoy equal protection under the law.

We aren’t all famous attorneys fighting in the Supreme Court, but there are ways each of us can fight for equality. As teachers, doctors, journalists, health care professionals, business owners and service workers we can all do our part, in our own way, to fight for the ideals of equality and honor the legacy of Ruth Bader Ginsberg.

It’s going to take all of us to keep the boot of oppression off of our throats.

That’s the weight we all bear.