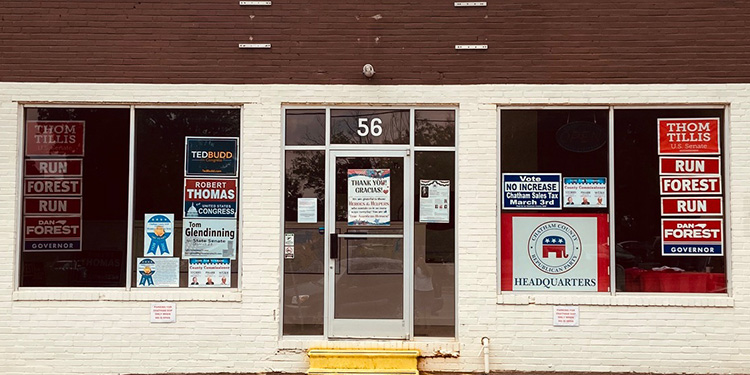 Jay Stobbs is running for District 1. He is a retired Colonel with thirty years of service in the U.S. Army. After retiring from the army Stobbs worked as a Senior Scientist and Engineer for six years at Northrop Grumman Corporation.

Jimmy Pharr is a candidate for District 2. A businessman and Bible Professor, he served in the U.S. Air Force as a Communications specialist.

Andy Wilkie is the incumbent candidate for District 5. Appointed by the Board of Commissioners in 2019 to fill a vacancy, he served for six years as a paratrooper in the U.S. Army Reserve at Fort Bragg. Commissioner Wilkie created the Project Help non-profit for serving the homeless people in Sanford.

Even though Chatham County consistently ranks in the top five in North Carolina for per capita income, 11.7% of the residents are within the federal poverty level. With wealth concentrated in the eastern part, particularly in the northeast quadrant, the county can expect poverty challenges at the extreme ends of the income curve.

Property tax, on the actual value of the property, is an important source of revenue for county and town/city governments. The rate is set by the Chatham County Board of Commissioners. Another noteworthy source of revenue is sales tax from businesses. All three Republican candidates are opposed to raising property and sales taxes.

Local governments regulate land use zoning ordinance. In 2015, the Board of Commissioners voted to begin the zoning process in areas that were not then zoned. Whereas bona fide farms are exempted from zoning regulations, farmers in the western part of Chatham County are concerned. The above three Republican candidates are committed to safeguarding farmlands.

To reiterate, in borrowing from locals, the county government needs to listen to everybody, but the Democrats govern like they are entitled to power. Let me emphasize again that we need to vote for all three Republican candidates to the Chatham County Board of Commissioners: Jay Stobbs, Jimmy Pharr, and Andy Wilkie.