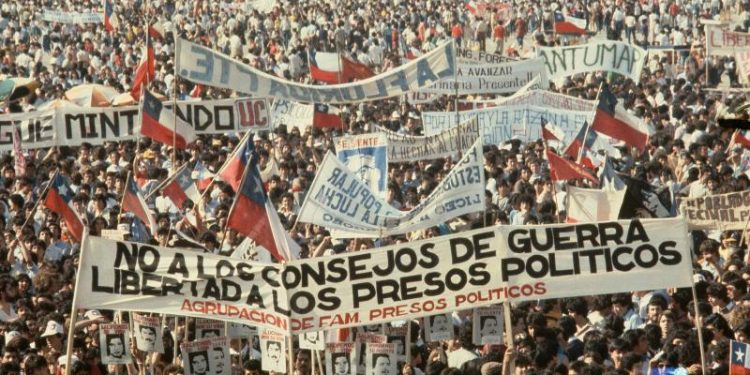 by James A. Wood

Democracy has been battered in recent years. Press freedom assaulted. Voting rights abused. Peaceful protests attacked. We have seen this in the United States and we have seen it around the world. But democracy is resilient. It withstands and recovers, when given the chance. As we await the certification of the results of a historic election here in the US, an election that will have an enormous impact on American democracy, a country on the other side of the planet has sent us a message of hope.

A year ago, the people of Chile rose up spontaneously against higher subway fares. But that was just the tip of the iceberg. The deeper issue was a socioeconomic and political system that was weighted against the interests of ordinary citizens. As the protesters who filled the plazas of Santiago and other Chilean cities chanted in October 2019, “It’s not 30 pesos it’s thirty years!” referring to the amount of the fare increase as well as the three decades that had passed since the end of Chile’s military dictatorship.

The dictatorship of General Augusto Pinochet, installed by the violent overthrow of Dr. Salvador Allende’s Popular Unity government in September 1973 and ended through a ballot referendum in December 1989, had a lasting impact on Chile. A big part of that legacy can be found in the 1980 Constitution, which was put in place to legitimize Pinochet’s dictatorial powers.

On the economic policy front, the 1980 Constitution allowed the regime to turn Chile into a neoliberal showcase. Milton Friedman and his band of “Chicago Boys” advised Pinochet directly on how to restructure the Chilean economy. It was one of the earliest test cases of economic “shock therapy” on a national scale. Resources were privatized. Businesses deregulated. Labor and environmental protections stripped away. The Chilean economy was thrown open to foreign investment. Those at the top did extremely well; those at the bottom struggled to survive.

The system put in place during the dictatorship did not end with the dictatorship. As Chile entered a transition back to civilian, democratic rule in the 1990s, the political class overseeing that transition decided against any major constitutional changes or structural reforms. The military no longer ruled the country directly, but its constitution did.

I was in Chile several times in the 1990s doing research for my graduate degree. I saw up close the disillusionment that many Chileans, especially young people, felt as they saw their newly re-democratized country turn into a land of fast food chains, fancy malls, and television advertisements. While the whole panoply of goods and services offered by globalization shimmered on the surface of things, inequality soared. Yet despite public frustration with growing inequality, the spark of revolt faded, at least of a while.

The protest movement that broke out in October 2019 was not entirely new. Throughout the previous decade, protests broke out frequently at schools and universities over rising tuition costs and the idea that there were two separate and unequal educational systems – one for the rich and connected and one for everyone else. Efforts were made by progressive-minded presidents like Ricardo Lagos and Michelle Bachelet to address student demands, but they did not go far enough. Frustration continued to build.

That frustration boiled over a year ago, triggered by the increase in subway fares and the seeming indifference of the political class to the needs of the people. Hundreds of thousands of people took to the streets in what became known as the estallido social, or outbreak of social unrest. Subway stations became the sites of violent clashes between police and demonstrators. Tensions rose. Many protesters were teargassed and shot with rubber bullets (many in the eyes, suffering horrible injuries).

One of the most remarkable things about the October 2019 mass demonstrations was the way they transformed from a protest movement into a wide array of neighborhood organizations (often referred to cabildos abiertos or open councils, suggesting a parallel with the councils that initiated Chile’s struggle for independence from Spain in the 1810s). From the moment of their creation these councils, composed of ordinary citizens, formed the backbone of the movement to write a new constitution. They did the work and kept the pressure on.

The government of billionaire businessman Sebastián Piñera declared a state of emergency in response to the protests. He shuffled his cabinet, refused calls for his resignation, and survived an impeachment vote. In November, the congress yielded to the popular movement’s demands and announced a national referendum on constitutional change to be held in April 2020. Due to the Covid-19 pandemic, however, that vote was pushed back to October. Covid has hit Chile hard. The neighborhood councils formed in 2019 became an important source of support for many Chileans impacted by the prolonged lockdowns and closures associated with the pandemic.

On October 25, 2020, Chileans finally went to the polls to answer two questions. First, do you approve of writing a new constitution? Second, how will the people writing this new constitution (i.e. the constituents) be selected? An overwhelming majority said very clearly that they approved of writing a new constitution and that voters should select 100% of the constituents. The vote was seen as a blow to the Chilean elite. Not surprisingly, the three wealthiest neighborhoods in Santiago, nestled snugly in the Andean foothills, voted against the measure.

So, what happens now? The October 25 plebiscite set in motion a two-fold process. First, a constituent assembly will be elected in April 2021. Second, voters will be asked to approve a new constitution no later than August 2022. My friends in Chile tell me the neighborhood councils and other community organizations that were created during the estallido social and the subsequent pandemic shutdown are still the spearhead of this movement. They will fight hard for a constitution that reorganizes public education, transforms social security, strengthens the rights of women, indigenous people, and the LGBTQ community, and does more to protect Chile’s abundant natural resources from exploitation by private companies.

All of which leaves me feeling, well, optimistic about the future of democracy in Chile, and maybe the rest of the Americas. Here is a people that decided enough was enough, a people that organized, mobilized, and worked for change. For now, at least, their efforts have pushed Chile into the vanguard of democratic nations. I wish them well in their ongoing struggle and dream about the day my own country might follow in Chile’s admirable footsteps.

Dr. James A. Wood is a tenured professor at NC&T specializing in nineteenth-century Latin American history, especially the political and social history of Chile.

Some winners and losers from the recent ...