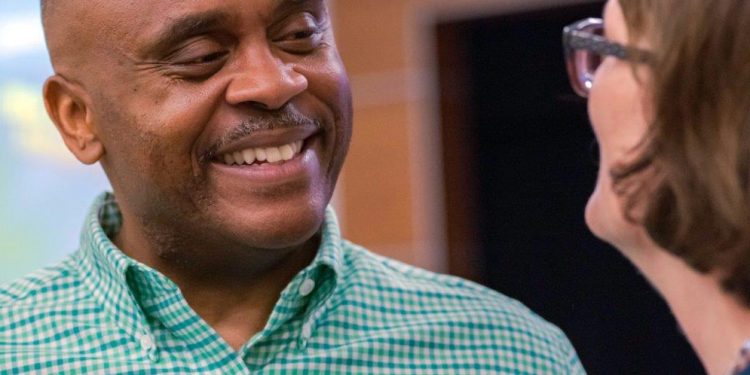 Chatham County’s Rep. Robert Reives was elected as the Democratic leader in the North Carolina House on Thursday, Dec. 3 in a unanimous vote by his fellow Democratic caucus members. Reives has represented District 54 in Chatham since 2014.

“I’d always believed in public service,” Reives said. “I had served on local boards, like the Boys and Girls Club and the Education Foundation. And when the opportunity to represent the district came up, I had two Republicans and two Democrats call me and say I should do it. I felt like I had something to give so I took the leap.”

Reives quickly rose to leadership, earning the Deputy Democratic Leader position in his second term, something Reives attributes to bipartisan bills he was able to get signed into law early in his career. This includes his first bill, a whistleblower protection bill for nursing homes and mental health facilities, something Reives “really cared about.” Reives credited positive relationships with members on both sides of the aisle made prior to his election as well as during his time as a legislator as part of his success.

“I’ve been given the opportunity to do some good legislative work—and bipartisan work at that,” Reives said. “I’ve made a lot of good friends, not just in the caucus, but on the other side as well.”

Reives grew up in Lee County, where he graduated from Lee Senior High School. His father, Robert Reives, Sr. was the first African American and longest-serving commissioner on the Lee County Board of Commissioners. After high school, Reives attended UNC-Chapel Hill for both his undergraduate degree in business with a concentration in finance, and his law degrees, later working in his own law practice.

Reives now lives in Goldston with his wife, Cynthia, and their two children, Brianna (13) and Robert, III (9), spending as much time with family as he can.

“Whatever the kids like to do at a particular time is literally my favorite thing in life,” Reives said. “Whether that is bike riding or talking about their day or playing video games—it’s my favorite thing to do.”

Reives also has a passion for music, having cultivated an incredibly diverse vinyl record collection dating from the 1950’s onward with “every kind of music you can imagine.” He also enjoys going to see live music, bringing his children when appropriate. His favorite live experience was at a small jazz festival prior to the pandemic where he reveled in his children’s enjoyment not only of the music, but in the opportunity to meet musicians, something he wishes more children had the chance to do. And he still plays a little bit of music himself—keyboard mostly, though he said he was probably best at the saxophone, though he rarely gets to play it.

“People would rather hear you bang on a keyboard than practice the sax,” Reives said with a laugh.

With Thursday’s unanimous vote of the Democratic House Caucus, Reives is the minority leader of the N.C. House. But Reives views his role moving forward very much the same way he has viewed his service up to now, “to be there for the people of Chatham County and for the people of North Carolina.”

Continuing through the travails of COVID, Reives wants to focus on helping rural hospitals, small businesses, and students and schools as they go through the “incredible strain” of the pandemic. Reives also wants to focus on improving access to broadband, particularly in rural areas. He noted that the pandemic has only expanded the learning gap, as well as exacerbating learning gaps that already existed.

“Just because of your zip code, you’ve lost a chance at an education,” Reives said. “I want to work to equalize that gap.”

Reives said he was honored by the faith his colleagues put in him to lead during such trying times. But at the same time, he hopes his role will provide an opportunity not only to bring good things to Chatham County, but to highlight “why it’s such a great place to be and to grow.”

“I appreciate the opportunity the people of Chatham County gave me,” Reives said. “It’s such a diverse county—its rural areas, its towns, its people—it really is a unique opportunity to meet and build relationships with a lot of great people. I really can’t think of another district I would rather represent.”