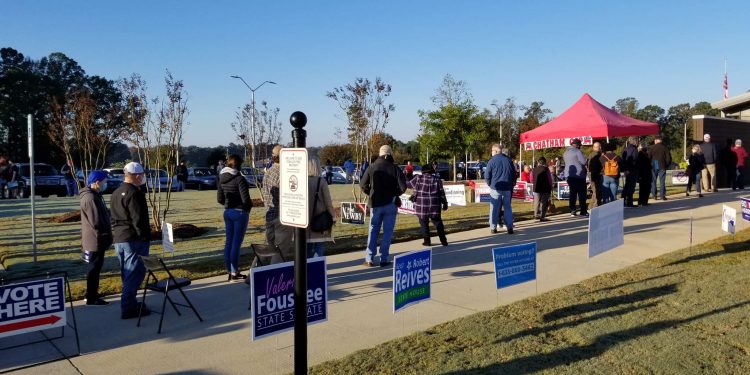 Chatham County residents are some of the most politically active in the state with election season occasionally resembling an old fashioned demolition derby.

Each election cycle, Chatham County ranks near the top for turnout percentage in North Carolina. For example, in 2018 the average turnout across the state was 52.98% while Chatham County was 26% better at 66.76%.

This year’s election will be different in several ways including redistricting and the continual effect of COVID-19. But despite these changes, Chatham County voters seemed poised to once again keep the county near the top for voter turnout in North Carolina.

As with every General Election year, all North Carolina voters will be able to cast their vote for a number of races voted on statewide. This includes the President and Governor’s races, but also for the Council of State which includes Lieutenant Governor, Secretary of State, Auditor, Treasurer, Superintendent of Public Instruction, Attorney General and the Commissioners of Agriculture, Labor and Insurance. Other statewide races include the judicial races for the North Carolina Supreme Court and Court of Appeals as well as the U.S. Senate.

A majority of the county, especially in the east, is now represented by the 4th Congressional District currently held by U.S. Rep. David Price (D-NC). Price, who has held the position for decades despite several redistricting plans. He is seeking re-election again and is being challenged by Republican Robert Thomas of Durham.

The western part of the county is now represented by the 13th Congressional District currently held by U.S Rep. Ted Budd (R-NC). Budd, who has held the position since 2016. He faces Democratic challenger Scott Huffman of Harrisburg.

Chatham County is represented by one N.C. Representative and one N.C. Senator in the General Assembly in Raleigh. In the North Carolina Senate, Sen. Valerie Foushee (D-23), who is seeking re-election, represents all of Chatham and Orange County. She has been in the Senate since 2013. She is being opposed by Republican Tom Glendenning. Glendenning previously ran unsuccessfully against Foushee in 2018.

Rep. Robert Reives, II (D-54) has represented Chatham County since 2014. His district currently covers all of Chatham County and portions of Durham County. He is facing Republican George Gilson, Jr.

Three of Chatham’s five commissioners are up for re-election this year. Though each represents an individual district in the county, all Commissioners run countywide which means every voter across the county can vote for each commissioner.

In District 1, incumbent and Chatham County Board of Commissioners Chairman Karen Howard seeks her second full term as commissioner although this is her third time on the ballot. In 2014, Howard, a Democrat, was selected to fill the remainder of Commissioner Sally Kost’s term and was originally elected with Diana Hales and Jim Crawford in 2014 to fulfill the remainder of the term. She has previously served on the Chatham County Board of Education. Her opponent is Republican Jay Stobbs who has run unsuccessfully several times for political offices in Chatham County including the seat he is currently seeking and for the N.C. House in 2018.

Democratic District 2 Commissioner Mike Dasher is also seeking his second term having first been elected to the role in 2016. In 2019, he served as the Chairman of the Chatham County Board of Commissioners. He is facing Republican Jimmy Pharr.

District 5 Commissioner Andy Wilkie is the lone Republican on the current Board of Commissioners. He is seeking election after being appointed last year to fill the seat long-time Commissioner Walter Petty vacated when he resigned in April. Wilkie is facing Franklin Gomez Flores of Siler City. Flores is a young unaffiliated candidate (meaning he holds no party affiliation) who was able to secure a place on the ballot after a robust petition campaign during the primary season. Flores graduated from Jordan-Mathews and UNC-Chapel Hill and currently serves on the county planning board.

Five people are seeking to fill the two positions up for election on the Chatham County Board of Education this year. As a non-partisan race, the number of possible candidates is not limited to party affiliation. Similar to the Board of Commissioners, Board of Education members must live in the district they represent, but are still voted on at-large by the entire county.

District 1 incumbent Melissa Hlavac is seeking re-election to her second term, having served on the board since 2016. She has two opponents, Timothy Winters and Ryan Armstrong.

David Hamm, the incumbent who has represented District 2 since 2008, is also seeking re-election. He faces a single candidate, Dennis Lewis.

There are several candidates on the ballot that are running unopposed. These include all of the District judge candidates, Chatham County Registrar
of Deeds and the Chatham County Soil and Water Conservation District Supervisor positions.

HOW AND WHERE TO VOTE

Requests for an absentee ballot can only be made by the voter or a close relative such as a spouse, parent, child, sibling or guardian. Ballots must also be completed properly to be accepted. This means not only completing all sections of the information portion of the ballot and the voter’s selections, but also a witness to the ballot completion, verified by the witness’ signature. Absentee ballots must be received by the Chatham County Board of Elections office by 5 p.m. on election day, Nov. 3.

Early voting begins on Thursday, Oct. 15 and runs through Saturday, Oct. 31. This year, the Chatham County Board of Elections has expanded locations and hours for early voting to facilitate social distancing during COVID.

The county will have six locations for early voting as opposed to four as it has in the past. The sites are located throughout the county, but additional sites were added in the northeastern portion of the county where the population is denser. The six sites for early voting are: Goldston Town Hall, the Paul Braxton Gymnasium in Siler City, the Chatham County Agricultural and Conference Center in Pittsboro and the CCCC Health Science Center off U.S. Hwy. 15-501 in Pittsboro, Governors Village on Moring Drive in Chapel Hill and the New Hope Baptist Church on New Hope Church Road in Apex.

On Election Day, Nov. 3, voters will be able to cast their vote at designated polling sites for their precinct, but some of those locations have changed since the last election. In order to ensure safety and proper social distancing, the Chatham County Board of Elections has changed the locations of 14 of the county’s 18 polling sites, some of which will actually be located outside of the actual precinct.