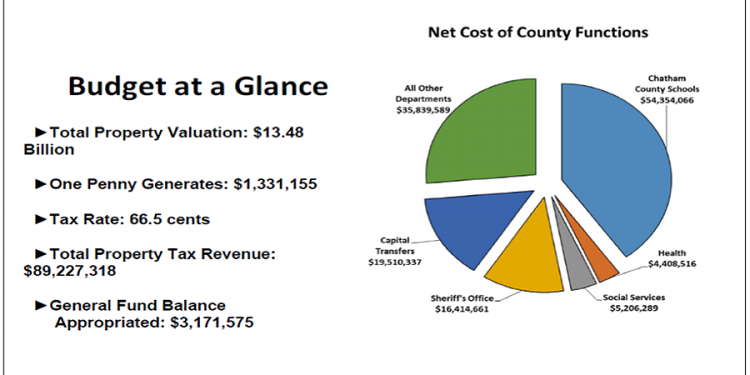 Chatham County has approved its $150 million budget which is an increase of about $17 million from the previous year’s budget. With increased revenue from an estimated 14% increase in property values due to growth and new construction, the budget also reflects a reduction of the county’s property tax rate by ½ a cent from 67 cents per $100 of valuation to 66.5 cents.

Even with the reduced tax rate, the county estimates that revenue from real property taxes will increase from about $80 million during FY 2020-2021 to more than $89 million in the upcoming fiscal year. The budget also estimates increases in other forms of revenue including permitting fees and sales tax. There are also several increases in fees for some inspections and utilities that impact new construction.

“For several years, we have discussed the need to be properly prepared for the anticipated growth in Chatham County, and we are now at the point that the rapid growth and development we have long expected is happening,” said Chatham County Manager Dan LaMontagne. “Throughout this budget, you will see that we are focused on ensuring that the development that is occurring is well monitored and aligns with the long-term vision that Plan Chatham has laid out for Chatham County.”

A large portion of the county’s budget, approximately $55 million, will go to the Chatham County School system. This includes an additional $2.4 million for the opening of the new Seaforth High School, additional funds for supplementing teacher salaries, and $5.2 million in debt payments for new school construction.

The budget also allots about $18.5 million to the Sheriff’s Office, $5 million for Social Services, and about $4.5 million for the Health Department. Nearly $36 million will go to support the remainder of the county’s departments.

The county will also hold close to $40 million in its reserve account which is 31.57% of the estimated General Fund expenditures – significantly higher than the state’s required 8%. The county has often tried to maintain between 20-25% in the reserve fund to protect its bond rating and financial health. According to Kara Dudley, Chatham County’s Public Information Officer, the significant reason for the increase is the “unbudgeted addition of the Coronavirus Relief Fund” that occurred mid-year.

“This is an activity outside of the norm that makes the projected year-end [reserve] fund balance contribution larger than it would be in ‘normal’ years,” Dudley said.

With the additional revenue, the county’s budget includes funding for 31 new positions. Several of the positions are in anticipation of new construction growth including 2 new staff members in Building Inspections and one each in Central Permitting, the Register of Deeds, and Watershed Protection. There will also be increased staffing in public safety such as five additional positions in Emergency Communication, one for the Chatham 360 Pre-trial Release Program, two new Animal Services Officers, 11 new Detention Officers and one new Law Enforcement Officer. Additional positions include two new members in both the Social Services and Facilities Departments and one each in the Parks and Recreation Department and the MIS Department.

The budget also includes a 2% increase in the county’s contribution for healthcare for its current employees, as well as merit-based raises. Effective July 1, 2021, employees who have met expectations will receive an increase of 3% in their salaries.

“Due to the uncertainty with COVID-19 last year, we were unable to provide salary increases at that time. The Board wanted to make sure that our dedicated staff are recognized for the excellent work each of them does for the residents of Chatham County,” added Dasher. “We are grateful for all the work they do and their commitment to making Chatham County the best in North Carolina.”

In addition to new positions, the budget includes several improvements for cybersecurity following the county’s cyber attack last year, a revision of the Farmland Preservation and Open Space Plan by Cooperative Extension and Soil and Water Conservation District, an extension at the walking trail at the Southwest District Park, and an allocation of $75,000 to the Chatham Economic Development Corporation to provide financial assistance to small businesses in the county affected by the pandemic. Three fire departments – Bennett, Pittsboro and Silk Hope – will also receive increased funding as requested by those departments.

“We are confident that all major revenues are on track to meet or exceed budgeted figures, which bodes well as we continue to expect and plan for growth,” said Chatham County Board of Commissioners Chair Mike Dasher.

Casey Mann can be reached at News@ChathamCountyLine.Org.