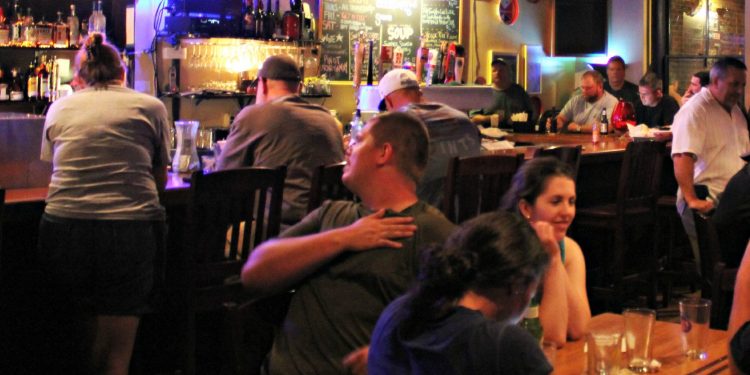 The Pittsboro Board of Commissioners held a public hearing to begin considering a change to its zoning ordinance regarding where bars, taverns, and similar establishments may be located. Currently, those types of businesses are allowed “by right” only in mixed-use development zones. In commercially-zoned districts, they are permitted only when a “special use permit” is obtained. The restrictions attached to that type of special use permit include distances from churches, schools, parks, and areas zoned residential.

The proposed change would permit bars and taverns “by right,” meaning without requiring a special vote of the board, in those commercial districts and especially downtown. Regardless of the location, any venue of this type would still have to adhere to the town’s noise ordinance limiting decibel level after a certain time in the evening.

The proposed change was introduced to the board by interim planning director Theresa Thompson. Thompson noted that this change was being proposed specifically to address the ability to do this downtown, but would affect other commercial districts located within all the areas under the town’s authority.

Mayor Jim Nass, who previously served as the chairman of the Pittsboro ABC board, noted that any establishment would still need to apply and complete all required permitting processes in order to receive an ABC permit from the state, which would include a public comment period from the town and interested parties.

Commissioner Jay Farrell was concerned that this change would affect residents whose homes are located in commercial districts, but Thompson stated that as those homes are currently zoned as commercial, but used for residential, they are not meant for consideration in the zoning ordinance, even if the proposed change were not approved.

Commissioner John Bonitz noted that, in the future, there may be projects which would include commercial uses on the first floor of a building, with apartments constructed on upper floors. Bonitz noted that “someone may want to live near or over a bar or tavern, that would be a valid use, and I don’t want to inhibit that.”

Mayor Pro Tem Pamela Baldwin noted that she was comfortable with the change to bars and taverns being allowed “by right,” but asked that notes be included for keeping a distance from schools and churches.

Commissioner Kyle Shipp said that several of the establishments currently in downtown may still not be compliant with the current zoning. He felt that the “special use permit” requirement would make for a difficult standard. As downtown areas are generally areas where these types of establishments are located, he believed it would be best to send all notes to the planning board to deliberate.

As is standard for these types of ordinance changes, once the public hearing is closed, the proposal is sent to the planning board to deliberate before sending a proposed change back to the town board for consideration. As no member of the public spoke either in support or opposition to the proposed change, the commissioners’ notes will be the only input the planning board will receive.