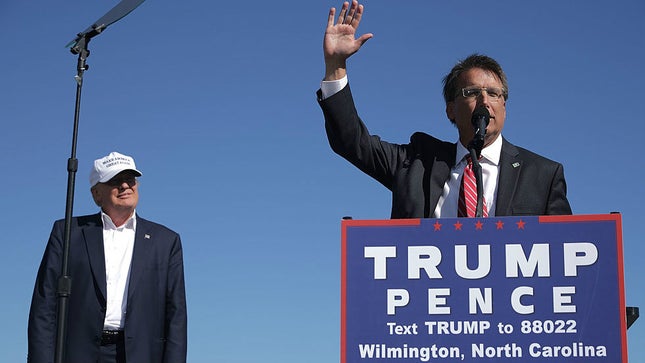 Pat McCrory, North Carolina’s former governor, Charlotte’s former mayor and current GOP candidate for the U.S. Senate, doesn’t come across as an original thinker. As governor, he was an affable boot lick to Sen. Phil Berger and rubber stamp to all of his legislation, including the notorious HR2 “bathroom” bill.

Nonetheless, he was the first Republican candidate to cry “vote fraud” when he lost a close election. He wrote the part of the Republican Play Book that Trump used when he lost, and continues to use to this day.

In the 2016 election, McCrory lost to Gov. Roy Cooper by 10,277 votes; if it were 10,000 or fewer, he could have demanded a recount. McCrory could not believe that he lost. That a majority of North Carolina voters rejected him. That he was the first North Carolina governor to lose reelection since 1850. Delusion ran deep.

McCrory and his political goon squad, crying “vote fraud”, accused hundreds of individual voters of voting twice. The allegations all proved false. A month after the election, McCrory conceded to Cooper gracelessly, continuing to this day to express concerns about ballot harvesting, or political operatives acquiring somebody’s absentee ballot and voting for the candidates themselves.

This did indeed happen, only the Republicans were the crooks and they got busted. In North Carolina’s Ninth Congressional district, the results for the 2018 election were thrown out because of ballot harvesting. Republican operative Leslie McCrae Dowless has been charged and faces trial for harvesting ballots in Bladen County on behalf of Mark Harris a conservative pastor/lying politician who hired him. Harris, who wept on the stand and claimed he had a stroke, will not face charges. The dirt bag faces prison, the dirt bag in chief doesn’t.

Those whom McCrory and his henchmen falsely accused of voting twice filed suit for defamation. On October 5, 2021 the NC Court of Appeals unanimously allowed the suit to go to trial. Barring a successful appeal to the NC Supreme Court, McCrory’s goon squad will face a jury and the possibility of paying for their lies and libel. McCrory isn’t named in the suit – the lying politician got away with it. His lying acolytes well may not.

Trump did the same thing when he lost. Early in the fall campaign he told his true believers that the only way he could lose was if the election were stolen. He did lose a close election, though not nearly as close as McCrory’s. Trump declared that he won in a landslide and said vote fraud in Arizona, Georgia, Michigan, Pennsylvania and Wisconsin stole the election for Biden. He charged that dead people voted in Georgia, and voting machines, controlled by the Chinese government, manufactured votes for Biden.

To date, neither Trump nor any of his most ardent supporters have provided any evidence back up his claims. His lawyers filed suit in more than 50 courts and lost in all of them because they had no evidence, including at least one three-judge panel where Trump appointed all the judges. Their cases were so transparently weak that that some Trump lawyers have been fined thousands of dollars for their frivolity and face disbarment. Rudy Giuliani has already been disbarred in New York and the District of Columbia for trying to use the courts to spread election lies. The company who make the voting machines are suing Trump’s lawyers and the right wing media who slandered them, for billions.

Trump true believers continue to buy the big lie. However those who stormed the Capitol on January 6, photographed and posted about themselves, are all getting busted. More than 600 face charges, a few have been convicted and are already doing time. Some of Trump’s flock is getting shorn.

Whether or not Trump faces the music for trying to overthrow the U.S. Government on the basis of his biggest whopper remains to be seen. Trump has avoided consequences for a host of misdeeds for his entire life. For him to actually face trial for anything I’ll have to see to believe.

That many continue to believe the big lie solely on the basis of his say so is discouraging; credulity that defies the imagination.

The fate of the nation is at stake. And to think our own Pat McCrory did it first, an original idea, albeit a sleazy one.