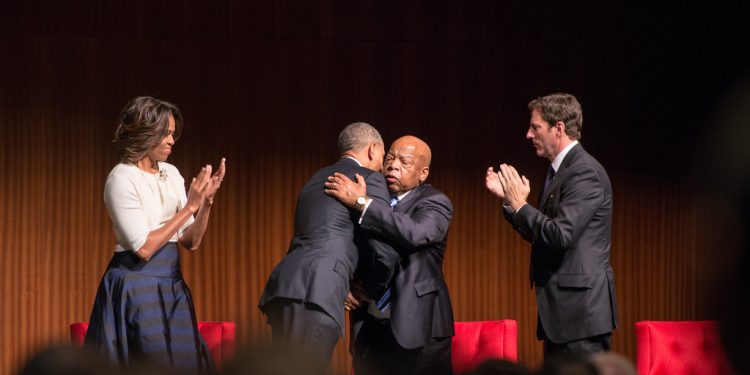 During this period when we have unrest sweeping the country and rioters looting and burning in various cities across the fruited plain, an advocate of non-violence, longtime congressman and civil rights icon, John Lewis, passed away and had a well-attended funeral.

He also was paid tribute to at the Democratic National Convention and many of his words were displayed at the convention. While he was a very strong voice for Black causes, he spoke against all forms of racism and bigotry. He refused to participate in the Million Man March, because Louis Farrakhan was involved and Farrakhan was an outspoken anti-Semite. He had a quote which summarized his attitude “The means by which we struggle must be consistent with the end we seek.” i. e. – if we want a peaceful solution, we should seek it peacefully.

At the funeral a number of eulogies to this civil rights icon were given. Almost all of them were praiseful of Lewis, his contributions and his life. The one exception was Barack Obama, who used the opportunity to make a political speech. Dr. Alveda King, niece of civil rights leader Martin Luther King, Jr., ripped Obama for politicizing the Lewis funeral service. She said “Well, I guess we should have expected that from the left, including President Obama, would take the occasion for a political moment…they’ll grab any opportunity, that’s to be understood. I have chosen not to politicize the death of Congressman Lewis, but to remember him as a peaceful, non- violent warrior, and encourage everyone to resolve our conflicts peacefully.”

Obama, in his comments at the funeral, lashed out at federal marshals currently sent out to protect federal buildings and compared them to Bull Connor and George Wallace during the days of the Democrat segregated south, saying “(Wallace) may be gone, but we can witness our federal government sending agents to use tear gas and batons against peaceful demonstrators.” I suppose in some parallel world there may be peaceful demonstrators, but in the U. S., demonstrators have been looting, burning, maiming and occasionally killing people. Some of the looters claim the goods that are stolen are “reparations”. Obama had a whole laundry list of policy issues that he ran through during this “eulogy” which he asserted were representative of the segregationist mindset of the Trump administration.

In all fairness, a number of these issues could have been addressed during Obama’s administration, particularly when he had majorities in both houses of Congress, but never got it done. Issues such as voter ID, mail-in balloting, making Washington, DC and Puerto Rico states, Senate filibuster rules, etc. are all issues that could have been addressed and passed by his ironclad majority in both houses, but he never got it done!! Obama knew this, so his politicizing them at a funeral of a truly great civil rights hero is nothing short of cynical and diverted the attendee’s attention from what they had come for. I suspect even Saul Alinsky would raise his eyebrows at this abuse of basic decency. Where is Valerie Jarrett, his confidant while he was in the White House? She certainly would have prevented/ softened this vulgar ethical display.

Two recent updates to articles previously published. Black Lives Matter was recently marching/protesting in Charlotte chanting “F*ck your Jesus”. This should not come as a surprise to anyone since the Christian church and communism/Marxism have been enemies from the inception of Marxism. This may give some Christians pause, since the thought behind BLM sounds so virtuous. It’s just that Marxism, while sounding good, simply does not work as a viable economic system. Also, the latest findings in the death of George Floyd indicate he died from a drug overdose and his saying “I can’t breathe” were a result of the drugs impairing his breathing rather than any police act. As the video tape would seem to indicate his cries of “I can’t breathe” were uttered before any significant police pressure was applied. We’ll see.