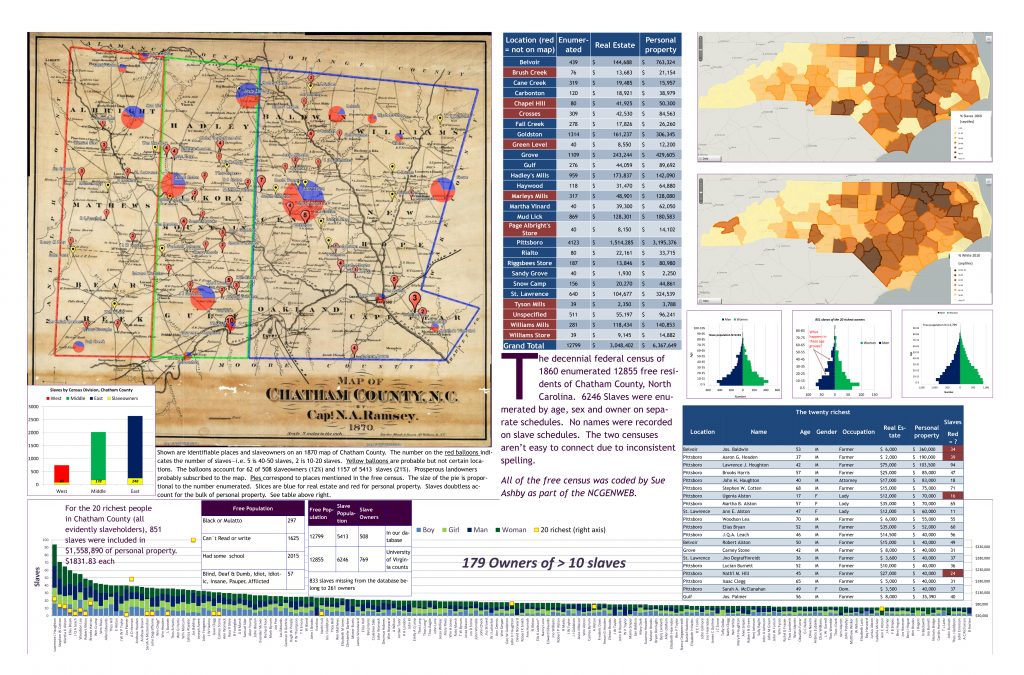 Current Chatham residents are likely unaware of the county’s history in the context of slavery. This snapshot compiled by Chatham County resident and Harvard alumnus Warren “Gus” Reed is instructive. It is interesting to consider what Chatham County is today and important to consider where we started.

Some may recognize the historic 1870 Chatham County map completed  by Captain N.A. Ramsey. A version of this map has hung in the Chatham County Register of Deeds office for many years and has been used as a tool to gain insights into Chatham County during the era of Reconstruction. This was a time before modern highways, Jordan Lake, and when a portion of modern day Lee County was still a part of Chatham County. Siler City had yet to be established, but Pittsboro was the county seat and Goldston was a thriving small town southwest of Pittsboro. Reed overlaid his research into slave ownership in Chatham County and information he obtained from the 1860 census onto the historic Ramsey map.  The result is an illustration of both where slaves were located in 1860, and their value to  the County’s coffers in the form of tax value and revenue. For example, in Pittsboro the tax value of slaves was $3,195,376 for 4,123 slaves which equates to approximately ;$775 per slave, while the value of the land was $1,514,285. This meant that the tax value of the slaves was 111% more than the value of the land. The “Belvoir” area, which is west of modern day Briar Chapel, had 439 slaves valued at $1,738.77 per slave for a total value of $763,324—a figure that was 428% more than the value of the land itself. This implies that in 1860 a large amount of “taxable wealth” in Chatham County was in the form of slaves, not to mention the economic value/output that those slaves produced on behalf of their owners. Reed’s map also provides other insights including the twenty largest slaveholders in 1860; the age and breakdown of the slave population; where the slave population was located; and where the slave owners, whether large or small lived.  For example almost half of the slave owners lived in the eastern part of the county, with 35% in the middle and the remainder in the west. (The distribution  across the county was likely influenced by the nature of the land and the areas where Quakers resided.) A final insight is a state map from 1860 showing the percentage of slaves in each county. Chatham County was similar in ownership numbers  to neighboring counties.